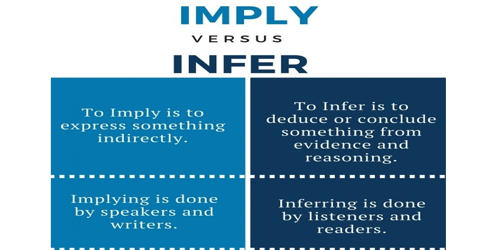 Difference between Imply and Infer

Imply and infer can be easily confused due to their somewhat similar meanings. ‘Imply’ and ‘Infer’ are the two most confounding words in the English language, which people use synonymously, due to the interconnectivity in their meanings. ‘Imply’ means to suggest or to say something in an indirect way. ‘Infer’ means to suppose or come to a conclusion, especially based on an indirect suggestion. Nevertheless, they are diametrically opposite terms, as ‘imply‘ means to tell or convey something implicitly, i.e. without directly expressing it.

On the other hand, ’infer‘ means to arrive at a conclusion, considering the facts and evidence resented to you. We imply something by what we say. We infer something from what somebody else says. The main difference between these two words is that a speaker can imply, but a listener can only infer. The one who implies is the sender of the message in the process of communication. Conversely, the one who infers is the receiver of the message.

Difference between Imply and Infer