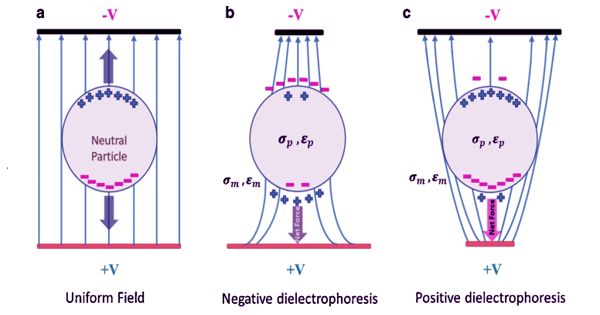 Dielectrophoresis (DEP) is an electrostatic phenomenon in which a non-uniform electric field created by electrodes interacts with polarizable suspended particles in order to control and manipulate particle movement. It is a phenomenon in which a force is exerted on a dielectric particle when it is subjected to a non-uniform electric field.  It is one of the most conspicuous electrical methods—it can achieve high precision and efficiency when operating on a single cell or a group of cells. This force does not require the particle to be charged. It is the movement of dielectric particles in an inhomogeneous electric field. All particles exhibit dielectrophoretic activity in the presence of electric fields.

Consequently, fields of a particular frequency can manipulate particles with great selectivity. It is defined as the motion of a neutral particle caused by polarization effects in a non-uniform electric field. This has allowed, for example, the separation of cells or the orientation and manipulation of nanoparticles and nanowires. The force does not require the particle to be charged. All particles exhibit dielectrophoretic activity in the presence of nonuniform electric fields.

DEP is the term used to describe the motion of particles when they are exposed to an electric field gradient. Unlike electrophoresis, the particle need not carry an electric charge, and alternating, radiofrequency, electric signals rather than direct current voltages are usually employed to energize the electrodes.

Dielectrophoresis has various applications, especially in the biomedical field, including cell transfer, in vitro fertilization, and biological assays. Furthermore, a study of the change in DEP force as a function of frequency can allow the electrical (or electrophysiological in the case of cells) properties of the particle to be elucidated. Dielectrophoresis has also been used for cell fusion, which has led to advances in crossbreeding, cancer immunotherapy, and biomedical research. Perhaps most prominently, dielectrophoresis is used to sort cells, and to characterize changes in the electrical properties of cells.