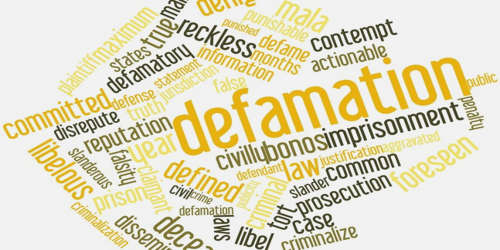 Defamation is a word used to describe both libel, which occurs in writing, and slander, which is spoken. It is the oral or written communication of a false statement about another that unjustly harms their reputation and usually constitutes a tort or crime. It occurs when something is said or written about someone which is untrue and damages their reputation. It refers to an injury to one’s good name or reputation. It is called slander when it is caused by means of spoken words, and ‘libel’ when it is in writing. Whether it is libel or slander, defamation harms a person’s reputation and can lead to a personal injury lawsuit. It is not a crime, but it is a “tort”. A person who has been defamed can sue the person who did the defaming for damages. In certain cases, it may be possible to bring legal action against those responsible for defamatory statements or comments.

While defamation is not a criminal act, it is serious and can harm a person’s emotional, physical and financial well-being. It is a false statement presented as a fact that causes injury or damage to the character of the person it is about. With the rise of social media and online news sources, it has become much easier to defame and as such, the threat of various defamation suits is only increasing. Political and social disagreement is important in a free society, and we obviously don’t all share the same opinions or beliefs.