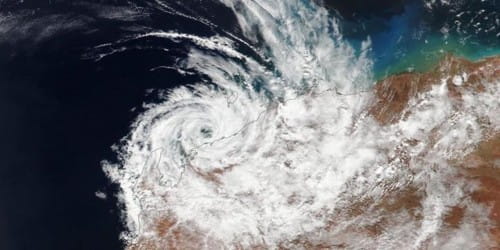 The word ‘Cyclone’ is derived from the Greek word ‘Cyclos’ a circle which means whirlwind. A cyclone is a very violent storm. They are irregular wind movements involving closed air circulation around a low pressure centre. Generally, cyclone means a kind of moving storm. Natural disasters can happen at whichever time and at any place. It always changes its direction and blows at the rate of 60 kilometers or more per kilometer. The cyclones level down inequalities of pressure and wind movement over the globe. When very strong winds whirling around the center of the storm moving at a terrific speed with an anti-clockwise motion in the northern hemisphere and with a clockwise motion in the southern hemisphere, a cyclone occurs. Heavy showers of rain, thunder and lightning are its companions.

This depression prevails on the ocean first. Then it gradually proceeds with much speed towards the land. The region that it touches becomes dark. The sky becomes cloudy. The flow of wind begins suddenly and the temperature rises. Such an environment forecasts that a cyclone is going to take place. Soon the sound of the wind becomes as loud as the roaring of a lion. Rains begin to pour in torrents with flashes of lighting and thunder. After developing, these cyclones advance till they find a weak spot in the trade wind belt.

It occurs mostly in the warm parts of the world. The tropical cyclones have a thermal origin, and they develop over tropical seas during certain seasons. Cyclone moves at a terrible speed. Houses, trees, crops, buildings are leveled to the ground. A cyclone often brings with it dreadful tidal bores. These huge sea-tides wash away everything – men, women, household things and animals. Ships and steamers are sunk due to it. The tragedy caused by the cyclone cannot be described exactly in words.

Man is a helpless puppet at the hands of the forces of nature, though science has conquered nature to some extent. When a cyclone blows, it moves round and round in the form of small circles. As nature is still more powerful than science, we shall have to take precautionary steps to stop the destructive effects of the cyclone. Advance warning of storms or cyclones will be needed and proper steps should be taken to ensure maximum safety of life and property. They play an important role in the complex process of heat exchange between various latitudinal zones.