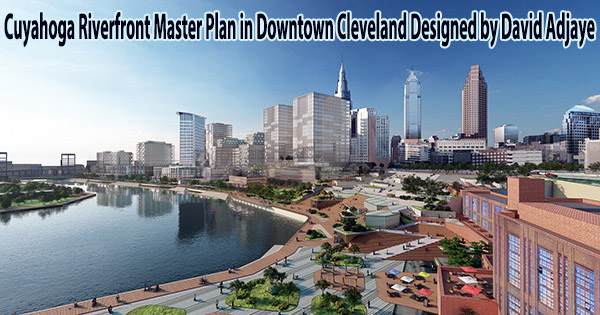 The Cuyahoga Riverfront Masterplan was launched by David Adjaye in collaboration with Bedrock and the city of Cleveland. It is a 15–20 year plan that will alter 35 acres of the riverfront to increase accessibility, equity, sustainability, and resilience of the downtown region. In addition to creating a sustainable infrastructure that promotes pedestrian circulation and stimulates open public areas, the design honors the city’s rich history and relationship to nature.

David Adjaye, a British-Ghanian architect, has been awarded Britain’s Order of Merit, making him the fifth architect to be appointed the honor.

By building a new Tower City Center marketplace, a central spine along the length of the property will link the Public Square to the riverfront. This is intended to be a centralized location with a variety of events, dining, and shopping options for everyone to enjoy.

The architect claims that the project transitions from commercial applications to more public and recreational activities close to the ocean using levels of use and activation. The city is also looking into ideas for a mobility hub to improve connections between the train and bus systems.

Our redevelopment strategy for the downtown Cleveland Riverfront taps into the lost heritage of the city, establishing a new relationship between the urban core and the shore. As I became more deeply immersed, the need to build a more tempered flow of movement through the city became immensely clear.

The west side of the development taps into the heritage of the “First City” to create a connection to the Cuyahoga Valley National Park system. Curated paths encourage walkability and accessibility and tie together the main features of the new neighborhood: office and retail spaces near Huron Road transitioning to smaller-scale residential blocks near the new Canal Road.

Enclaves of recreation, congregation, and culture punctuate the development all throughout. There is an amphitheater, a waterside belvedere, a sizable neighborhood park, and areas for activities for all ages. Collaboration with public, commercial, and non-profit partners is still crucial to achieving this mix of functions and activities.

The master plan utilizes cutting-edge, contemporary, and sustainable approaches to position the Cuyahoga Riverfront at the forefront of smart city development. New estuaries are introduced, along with irrigation possibilities for public parks and vegetation. To improve water efficiency in the area, it also uses green roofs, permeable pavements, and stormwater flow treatment.

Distinct energy systems will be implemented to reduce the impact on regional grid infrastructure and improve energy efficiency. LEED certification standards will also be pursued.

To transform Toronto’s Quayside waterfront into a new community with affordable housing, vibrant public spaces, and new commercial prospects, a group of architects, including Adjaye Associates, has been chosen.

David Adjaye Associates was also commissioned to design an exhibition with rare and previously unreleased work of Jean-Michel Basquiat to be hosted at the Starrett-Lehigh Building in West Chelsea, New York.

The Use of Local and Indigenous Materials in Philippine Architecture

The 10th Rotterdam Architecture Biennale, “It’s About Time,” Examines 50 Years of Climate Change in the Past and Future