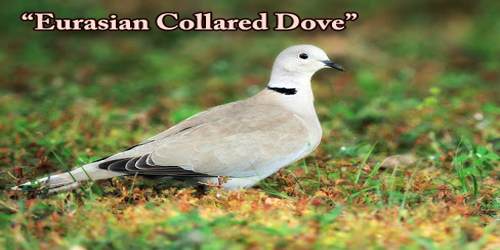 The Eurasian collared dove (Streptopelia decaocto) is a genus of doves native to Europe and Asia; it has been introduced to Japan, North America, and the Caribbean islands. Collared-Doves in Eurasia have plump limbs, tiny heads, and long tails. They’re bigger than Mourning Doves but slimmer than a Rock Pigeon and longer tailed. The wings are broad and rounded slightly. The short tail is squared off at the top, instead of pointing like a Mourning Dove’s. Call a low, repetitive kuk-koooo-kuk, accented on middle syllable; also a sharp, mewing nasal calling sound, reminiscent of a noisy Gray Catbird call to many observers. Because of its vast global range and increasing population trend, it’s been listed as Least Concern on the IUCN Red List since 2014. Eurasian Collared-Doves are chalky brownness to gray-buff birds with broad white patches within the tail. The collar of the bird is a thin black crescent around the neck nape. The wingtips are darker in flight, even when poised than the rest of the wing. Columba decaocto was the scientific name suggested by the 1838 Hungarian naturalist Imre Frivaldszky who described a collared Eurasian dove. The Eurasian collared dove is closely associated with the Sunda collared dove of Southeast Asia and therefore the African collared dove of geographic region, forming a superspecies with these. 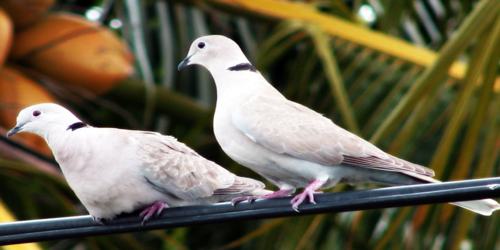 Eurasian Collared-Doves perch on telephone poles, wires, and in large trees and send three-syllable coos incessantly. Its strong flight pattern features bursts of clipped wing beats and glides that loop. These doves raise their heads while walking and flip their tails. Eurasian Collared-Doves frequently feed in stockyards and around silos on seed feeders at the backyard and on spilled grain. It is a medium-sized dove, noticeably smaller than the wooden pigeon, comparable in length to a rock pigeon but slimmer and longer-tailed, and slightly larger than the related European turtle dove, with an average length of 32 cm (13 in.) from beak tip to tail tip, with a wingspan of 47–55 cm (19–22 in) and a weight of 125–240 g (4.4–8.5 oz). Eurasian Collared-Doves lives in urban and suburban areas throughout much of the U.S. except the Northeast. In rural settings search for them on farms and in livestock yards where grain is on the market. In cooler months, flocks may roost together in large trees. The site is in tree or shrub, 6-70′ (usually 10-40′) above ground, often on the manmade structure. The nest is flimsy stick and twig platform; the male gathers stuff, female builds. Usually, Eurasian collared doves breed near human habitation anywhere there are sufficient food supplies and nesting trees; nearly all nests are within 1 km (0.62 mi) of occupied buildings. In a stick nest, the female lays two white eggs which she incubates during the night and which the male incubates during the day. Incubation lasts from 14 to 18 days, the young leaving after 15 to 19 days. Forages mainly while ground walking. When not breeding, usually forages in flocks. Sometimes flutters among branches of trees or shrubs to require berries. The Eurasian collared dove is not vigilant and often feeds close to human dwelling, including visiting bird tables; the largest populations are usually found around farms where spilled grain is often found near grain stores or livestock feeding.