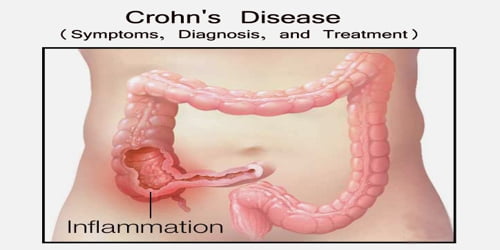 Definition: Crohn’s disease is an inflammatory bowel disease (IBD) that may affect any part of the gastrointestinal tract from mouth to anus. It most commonly occurs in the small intestine and the colon. However, the disease can affect any part of our gastrointestinal (GI) tract, from our mouth to our anus. The disease can involve some parts of the GI tract and skip other parts.

The inflammation caused by Crohn’s disease often spreads deep into the layers of affected bowel tissue. Crohn’s disease can be both painful and debilitating and sometimes may lead to life-threatening complications.

It isn’t clear what causes Crohn’s disease. However, the following factors may influence whether people get it:

Up to 20 percent of people with Crohn’s disease also have a parent, child, or sibling with the disease.

Signs and symptoms often include abdominal pain, diarrhea (which may be bloody if inflammation is severe), fever, and weight loss. Other complications may occur outside the gastrointestinal tract and include anemia, skin rashes, arthritis, inflammation of the eye, and tiredness. The skin rashes may be due to infections as well as pyoderma gangrenosum or erythema nodosum.

While there’s no known cure for Crohn’s disease, therapies can greatly reduce its signs and symptoms and even bring about long-term remission. With treatment, many people with Crohn’s disease are able to function well. 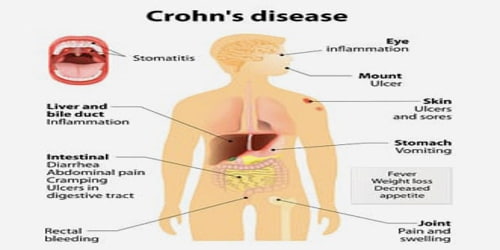 Signs and Symptoms of Crohn’s disease: Signs and symptoms of Crohn’s disease can range from mild to severe. They usually develop gradually, but sometimes will come on suddenly, without warning. They may vary over time and from person to person, depending on what part of the gastrointestinal (GI) tract is inflamed. And because symptoms vary from person to person, the way to gauge what people consider a flare-up of symptoms is relative to what is “normal” for them.

When the disease is active, signs and symptoms may include:

Other signs and symptoms –

Crohn’s can affect the entire GI tract — from the mouth to the anus — and can be progressive, so over time, people’s symptoms could get worse. That’s why it’s important that they have an open and honest conversation about their symptoms since the doctor will use that information to help determine what treatment plan is best for them. 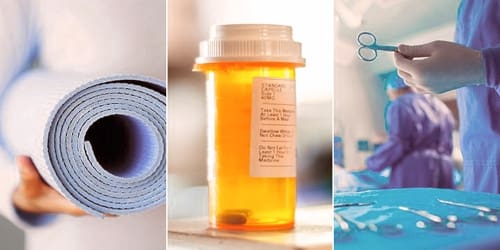 There is no one test to diagnose Crohn’s disease. The doctor will likely use a combination of tests to help confirm a diagnosis of Crohn’s disease, including:

Blood tests may include:

Even though there is currently no cure for Crohn’s disease, there is a wide range of treatment options available that can help control Crohn’s symptoms and even help people achieve and maintain remission (having few or no symptoms over a period of time) as long as they stay on their treatment as prescribed. In fact, achieving and maintaining remission is the main goal of Crohn’s disease treatment.

The benefits of surgery for Crohn’s disease are usually temporary. The disease often recurs, frequently near the reconnected tissue. The best approach is to follow surgery with medication to minimize the risk of recurrence.