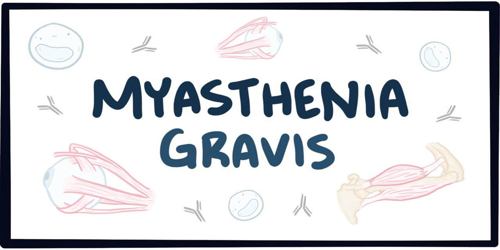 Myasthenia gravis (MG) is an autoimmune neuromuscular disorder that is characterized by fatigue and exhaustion of muscles. The most commonly affected muscles are those of the eyes, face, and swallowing. It can affect people of any age, typically starting in women under 40 and men over 60. It can result in double vision, drooping eyelids, trouble talking, and trouble walking. Onset can be sudden. Those affected often have a large thymus gland or develop a thymoma. 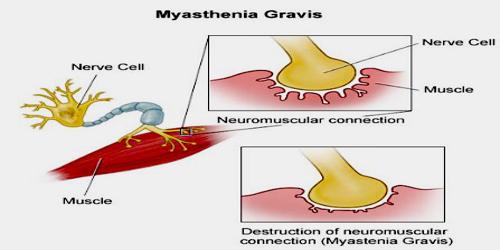 It occurs when communication between nerve cells and muscles becomes impaired. This impairment prevents crucial muscle contractions from occurring, resulting in muscle weakness. It is generally treated with medications known as acetylcholinesterase inhibitors such as neostigmine and pyridostigmine. Immunosuppressants, such as prednisone or azathioprine, may also be used.

Myasthenia gravis is a neuromuscular disorder that’s usually caused by an autoimmune problem. It is caused by a problem with the signals sent between the nerves and the muscles. It’s an autoimmune condition, which means it’s the result of the immune system, which is the body’s natural defence against illness and infection mistakenly attacking a healthy part of the body.

In myasthenia gravis, the immune system damages the communication system between the nerves and muscles, making the muscles weak and easily tired. It’s not clear why this happens, but it has been linked to issues with the thymus gland (a gland in the chest that’s part of the immune system).

In many people with myasthenia gravis, the thymus gland is larger than normal, and in around 1 in 10 people there is abnormal growth of the thymus called a thymoma. 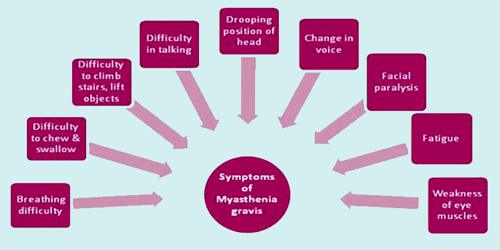 The main symptom of Myasthenia gravis is weakness in the voluntary skeletal muscles, which are muscles under patient’s control. The failure of muscles to contract normally occurs because they can’t respond to nerve impulses. Without proper transmission of the impulse, a blocked communication occurs between nerve and muscle and weakness results.

Common symptoms of myasthenia gravis include:

In a myasthenic crisis, a paralysis of the respiratory muscles occurs, necessitating assisted ventilation to sustain life. Crises may be triggered by various biological stressors such as infection, fever, an adverse reaction to medication, or emotional stress.

Not everyone will have every symptom, and the degree of muscle weakness can change from day to day. The severity of the symptoms typically increases over time if left untreated.

Diagnosis and Treatment of Myasthenia Gravis

Myasthenia Gravis can be difficult to diagnose, as the symptoms can be subtle and hard to distinguish from both normal variants and other neurological disorders.

Three types of myasthenic symptoms in children can be distinguished: 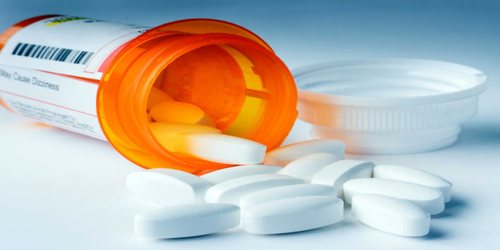 There is no cure for myasthenia gravis. The goal of treatment is to manage symptoms and control the activity of your immune system.

Medication: Corticosteroids and immunosuppressants can be used to suppress the immune system. These medications help minimize the abnormal immune response that occurs in MG.

Thymus Gland Removal: Removal of the thymus gland, which is part of the immune system, may be appropriate for many patients with MG. Once the thymus is removed, patients typically show less muscle weakness.

Plasma Exchange: Plasmapheresis is also known as a plasma exchange. This process removes harmful antibodies from the blood, which may result in an improvement in muscle strength.

Intravenous Immune Globulin: Intravenous immune globulin (IVIG) is blood product that comes from donors. It’s used to treat autoimmune MG. Although it’s not entirely known how IVIG works, it affects the creation and function of antibodies.

Lifestyle Changes: There are some things people can do at home to help alleviate symptoms of MG:

These treatments cannot cure MG. However, patient will typically see improvements in their symptoms. Some individuals may go into remission, during which treatment is not necessary.

General Symbols of a Sinus Infection

The Importance of Exercise with Multiple Sclerosis