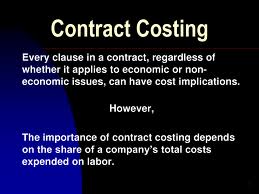 Contract costing is the tracking of costs associated with a specific contract with acustomer. For example, a company bids for a large construction project with a prospective customer, and the two parties agree in a contract for a certain type of reimbursement to the company.

The most typical types of reimbursement are:

Contract costing can involve a considerable amount of overhead allocation work. Customer contracts typically specify exactly which overhead costs can be allocated to their projects, and this calculation may vary by contract.

In some industries, such as government contracting and commercial construction, contract costing is the primary task of the accounting department, or may even be organized as an entirely separate department. Proper contract costing can contribute a considerable amount of profits, and so is typically staffed with more experienced contract managers and accountants.

Distinction between Merger and Purchase