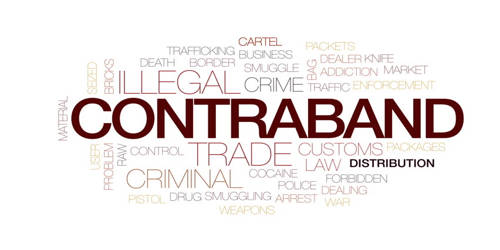 Contraband refers to property that is illegal to possess or transport. A Goods banned for export or import are called contraband. It is the goods that are brought into or taken out of the country secretly and illegally. It may be goods that are illegal to import or export and are attempted to be smuggled into a country. It is used for goods that by their nature are considered too dangerous or offensive in the eyes of the legislator termed contraband in se—and forbidden. Generally, these goods are brought into a country illegally, especially to avoid tax. The term is sometimes also applied to the goods carried into a country by smuggling. The penalty for carrying contraband goods is the confiscation of the goods and often also of the vessel.

Contraband goods are usually subject to seizure by government officials. In international law, contraband means goods that are ultimately destined for the territory under the control of the enemy and may be susceptible to use in armed conflict. Contraband is also commonly defined by correctional facility regulations, which prohibit prisoners from possessing certain harmful or potentially dangerous items.

Under the conditions of modern warfare, in which armed conflict has largely become a struggle involving the total populations of the contending powers, virtually all commodities are classified by belligerents as absolute contraband. Contraband may be a property that is not in and of itself unlawful for a person to acquire or possess but that has been determined by a court to be contraband, because of its use in an unlawful activity or manner, of its nature, or if the circumstances of the person who acquires or possesses it. At the beginning of World War II the belligerents drew up lists of absolute and conditional contraband, but the total absorption of the economy in warfare led to the prohibition, so far as possible, of all shipping to the enemy.