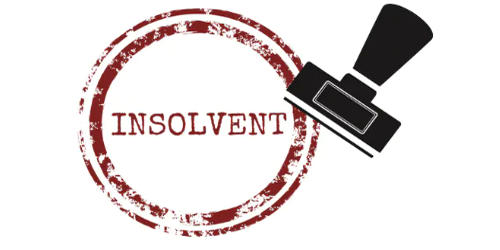 A person or organization that is insolvent does not have enough money to pay their debts. Insolvency is a term for when an individual or organization can no longer meet its financial obligations to its lenders as debts become due. When a company goes into liquidation its assets are sold to repay creditors, the business closes down, and its name is removed from the register at Companies House. Before an insolvent company or person gets involved in insolvency proceedings, it will likely be involved in informal arrangements with creditors, such as setting up alternative payment arrangements. The overall aim of an insolvent liquidation process is to provide a dividend for all classes of creditors, but it is often the case that unsecured creditors receive little, if any, return. Insolvency can arise from poor cash management, a reduction in cash inflow, or an increase in expenses.

Insolvency is a term used for both companies and individuals. If a company or individual is unable to pay its debts, this situation is known as insolvency. In practice, this usually means that bills cannot be paid when they become due – but insolvency also applies to the state of having more liabilities than assets. As an individual, it’s more popularly known as Bankruptcy, but for a company, it’s known as Corporate Insolvency. The term “insolvency” refers to both the situation of being insolvent and the procedures of dealing with insolvency.

There are two tests to determine whether your company is insolvent: