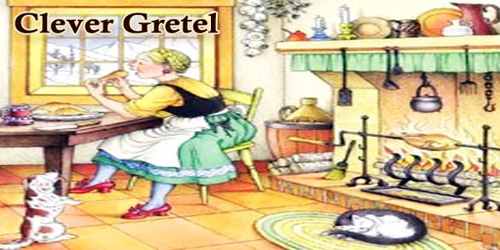 Once upon a time, there lived a lively cook whose name was Gretel. Gretel wore bright red shoes. When she went into town, she danced happily, and said to herself, “What a pretty girl I am. And so lucky. I am always surrounded by food!”

When she returned home, she would be in such good humor that she’d taste the treats she was cooking. First, she would taste one bit and then another. Sometimes well, often Gretel would feast on goodies until she was full. “A good cook must know how her cooking tastes!” she would say. “A good cook must not feed her guests anything she wouldn’t eat herself.”

One day her master came to the kitchen and said, “Gretel, I am having a guest for dinner. I want you to roast two fat chickens.”

“I’ll be more than happy to do that,” Gretel chimed. She skipped to the chicken roost and fetched two fine chickens. She butchered and plucked and scalded them. When the sun began to set, she put them on the spit. Soon they began to turn golden-brown.

But the guest had not yet arrived.

Gretel called to her master, “Sir if your guest does not come soon, I’ll have to take the chickens off the fire. It would be terrible not to eat them right away while they are at their juiciest. Oh, just smell them!”

Her master sniffed the air and smiled. “Yes, they smell good,” he said. “I’ll go to town and fetch my guest.”

After he had gone, Gretel looked at the roasting chickens. “Oh my,” she said, “standing over the fire so long makes a body sweat. And sweating makes a body thirsty. I think I’d best take a little of my master’s ale to cool myself.” She skipped down to the cellar and filled a jug, and upstairs she drank to her heart’s content.

Then she returned to the spit to check the chickens. She brushed them with butter and turned them. Then she danced a little jig, clicking her red heels, and sang a little tune.

Now the chickens smelled so good she said to herself: “These may not be seasoned exactly right. I’d better taste them to see.” She touched one chicken and then licked her finger.

“Mmm, mmm,” she cried, “it’s fine! I’d best taste the other one, too.” Again she brushed her finger over the chicken and licked it. “They are both fine!”

She turned the spit once more. She leaned in close and peered at their sides. “Oh, they are perfect now,” she said. “It would be a shame not to eat them this very minute!”

She ran to the window to see if her master and his guest were coming. In every direction, she saw only snow, and not a footstep anywhere.

She returned to the fire and looked closely once more. “That wing is burning now. There’s just one way to stop that,” and she sliced off the wing and gobbled it down.

“That was delicious,” she said. “But I’d better take off the other wing, too. Otherwise, my master will see something’s missing.” She sliced off the second wing and gobbled that one down. “Oh, that tastes good!” she said and danced a little jig.

Now she ran back to the window to look for her master. There wasn’t a soul in sight, only the bright stars twinkling above.

“Dear me,” said Gretel, “maybe they’re not coming. Maybe they have stopped at the inn to share a pitcher. Sometimes my master does that.” She poked her sides and giggled. “Come, Gretel,” she said to herself, “don’t be silly. One chicken has lost its wings; better than the others lose them, too. Once the wings are gone, you’ll have nothing to fret over.” She went back to the kitchen and polished off the wings of the second chicken.

Again she ran to the window. She saw no one coming. “Now the chickens will surely burn,” she said to herself, “and it’s a shame to waste God’s gifts.” She skipped into the kitchen and took one chicken from the spit. Before she knew what had happened, the whole chicken was gone!

“Mmm, mmm,” she said. “My master will be pleased that I cooked such tasty chicken!”

When Gretel went to the window to search for her master, she saw that still, no one was coming. “What a shame to waste a chicken by burning it,” she said. “And besides, what good is one chicken without the other? Chickens come in pairs.”

She ran back to the kitchen and began to eat the second chicken.

Just as she was finishing off a leg, her master burst into the kitchen. “Quick, Gretel, our guest will be here any moment. Prepare the feast!”

“Yes,” Gretel called, shielding the chicken so her master could not see. “I’ll serve you as soon as he comes.”

The master ran to the dining room to see that the table was properly set. He picked up his large carving knife and walked to the pantry to sharpen it.

Now the guest knocked softly on the door.

Gretel danced to the door, opened it, and smiled slyly at the guest. She put her finger to her lips. “Shhh,” she said. She leaned outside and whispered to the guest. “Go away quickly. If my master catches you, you’re finished! Do you know why he invited you to sup with him? He wants to cut off your ears and eat them! Listen, you can hear him sharpening his knife!”

She stopped talking, and the guest leaned forward to listen. “Oh no,” he said, and his face turned as pale as the snow that lined the cobblestones. “Oh no,” he said again, and turned and ran away.

Now Gretel ran to the pantry. “Master, master,” she cried at the top of her lungs, “a polite guest you brought to supper!”

“Your guest walked inside, grabbed those chickens and ran away with them as fast as he could.”

“That’s a fine way to behave,” he said. “If only he had left me one, then at least I’d have something to eat.”

Gretel’s master dashed to the door. “Stop!” he cried to his guest. “Just leave me one!” He waved his big knife in the air. “Leave one for me to eat!”

When his guest heard these words, he ran still faster, as if there were fire, not snow, beneath his feet.

Her master smiled at her. “You’re a clever girl, Gretel,” he said. “You always make the best of things.” 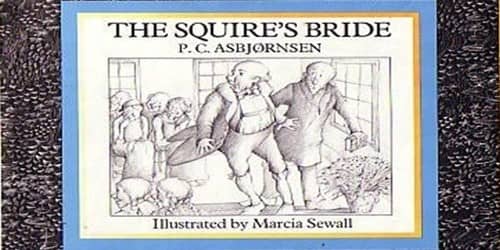 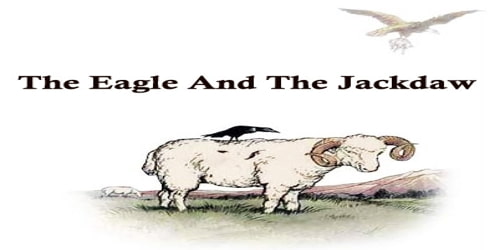 The Eagle And The Jackdaw 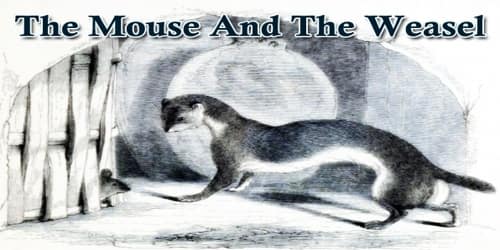 The Mouse And The Weasel 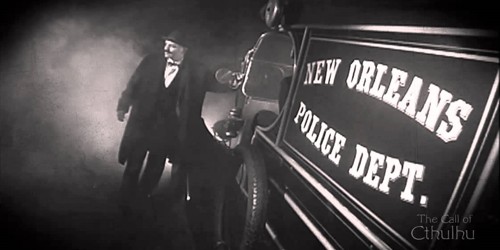 The Tale of Inspector Legrasse