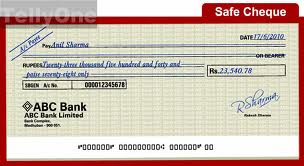 A cheque is a written order directing a bank to pay out money, and it’s exactly the same thing as a check, but with more exciting letters.

The American English word for the slip of paper that authorizes your bank to make a payment is check, which is the adjusted spelling of the British English cheque. That word comes fromexchequer which is like a bank, and so a cheque is a note that has the seal of the bank: an official piece of paper. Cheque can be used as a verb meaning “withdraw.”

There are three types of cheque. They are bearer cheque, order cheque, and crossed cheque

A bearer cheque is payable to the bearer and the banker is discharged from liability by payment in due course to the bearer thereof. Unless the form of drawing ‘bearer’ is changed to ‘order’, a bearer cheque is always a bearer one and no endorsement can make it payable otherwise than to the bearer thereof. Though such a cheque is not required to be endorsed for negotiation the recipient of cash must endorse it in token of having received the payment, otherwise the banker is entitled to ask for a receipt, where required, on revenue stamp, for the amount paid by him against the cheque. Further, a transferor by delivery i.e. without endorsement is not liable on the instrument.

In case of an order cheque it should purport to be endorsed by or on behalf of the payee. Where an order cheque has been endorsed by payee in favor of another, the endorsee must also sign it to receive the payment in due course. In practice, the banker insists on identification of the payee while making payment of such a cheque in cash. This is done to avoid any chance of being charged with payment out of due course.

A cheque (also banker’s draft) can be crossed generally or specially to a banker by the drawer, or the holder thereof. The crossing must be on the face of the cheque, there must be two lines drawn transverse and parallel. There cannot be any general crossing without the two transverse lines, with or without the words ‘and company’ or abbreviation thereof, though the name of a banker without the lines is sufficient to constitute a special crossing.

A cheque is payable on due presentation for payment if it is drawn in proper form duly signed by the drawer or his authorized agent, subject to the crossing, if any, and the sufficient credit balance in the concerned account or the arrangement made for an advance and the drawee banker is discharged from liability by payment thereof in due course. In the event of dishonor of a cheque due to a reason other than a valid one, the drawee banker is liable to the drawer for any loss or damage caused thereby.

There must be a person entitled to receive the payment of the cheque either as a payee or his endorsee or bearer. The drawer himself may also be the payee by writing his name, self or pay cash. In the absence of the payee’s name, the cheque cannot be treated as a bearer one nor it can be looked upon as a cheque at all and the better course would be to return it for completion under authentication of the drawer.

A post dated cheque is one which bears a future date as its date of issue. Such a cheque is valid and its negotiability is not impaired simply because it is post dated. But the banker cannot pay it earlier than its date because the drawer’s mandate is not to pay it earlier.

Where a cheque bears a date before the date of its issue it is known as an antedated cheque and is not invalid because of only antedating provided this does not involve any illegal or fraudulent purpose or transaction. A cheque antedated for more than six months becomes stale or out of date as per banking practice.

As per banking custom a cheque (also banker’s draft) becomes ‘stale’ when it remains circulation for more than six months, though there is no legal sanction in this respect. Such an instrument is not honored by the drawee banker unless revalidated by the drawer. But it does not appear established that the drawer or the endorser of such an instrument is discharged from liability unless barred by limitation of three years.

The payment of a cheque is subjected to the drawer’s having sufficient credit balance in his account (s. 31, NIA) unless an arrangement has been made by the drawer for an overdraft. When the balance is not sufficient to meet the whole amount of the cheque, the payee cannot demand a part payment nor the banker is bound to make such a payment, as the cheque cannot be considered as an assignment of funds in order to enable the payee have an equitable claim on the drawer’s balance.

No Payment for Valid Cheque:

A cheque does not become payable even if it is valid for payment, where-

1. Crossing of the cheque. (Cheque and Crossing)

A “Cheque” is a bill of exchange drawn on a specified banker and not expressed to be payable otherwise than on demand. [According to section-6, negotiable Instrument Act, 1881.]

A cheque may be classified into:

a) An open cheque which can be presented for payment by the holder at the counter of the drawer’s bank.

b) A crossed cheque which can be paid only through a collecting banker.

2. (Computer) posting of the cheque.

4. Separation of cheque from deposit slip.

5. Sorting of cheque 1st bank wise and then on branch wise.

8. Examine computer validation sheet with the deposit slip to justify the computer posting .