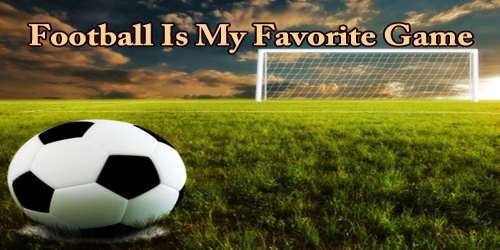 A game is an activity involving one or more players. Games are played primarily for entertainment or enjoyment, but may also serve as exercise. Everyone in this world has their own favorite games, so do I. My favorite game is football. I often play this with my friend in the evening. I like this game because it is exciting and challenging.

The football field is 120 yards long and 80 yards wide. The two-goal posts are placed at the two ends of the field. The field marked by boundary lines on four sides. The game is played between the two teams. Each team has eleven players. Among the players of each team, there is one goalkeeper, two full-backs, three half-backs, and five forwards. There is a referee. He conducts the game with a whistle.

A ball is placed at the center of the field. The players on each side take positions on either side. As soon as the referee blows the whistle, the ball is kicked off and the play starts. Each team tries to score a goal against the other. The game usually lasts for ninety minutes with an interval of 10 minutes. It is a ball game played on a rectangular grass field with a goal at each end. The objective of the game is to score by maneuvering the ball into the opposing goal. The winner is the team which has scored the most goals at the end of the match.

Football is played at a professional level all over the world, and millions of people regularly go to football stadiums to follow their favorite team, whilst millions more avidly watch the game on television. A very large number of people also play football at an amateur level. In many parts of the world, football evokes great passions and plays an important role in the life of individual fans, local communities, and even nations; it is therefore often claimed to be the most popular sport in the world.

No player except the goalkeepers is allowed to touch the ball with his hands during the continuation of the game. If one of the players of a team passes the ball through the goal post of the opposite team, the team is said to have scored a goal. The team that leads in the number of goals is declared the winner. The referee conducts the game according to specific rules. There are also four linesmen in the game who stands in the corners of the field to assist the referee. The game is divided into two parts of 45 minutes each. There is an interval of 15 minutes between the two halves. In the case of knock-out games, the extra time and at last tie-breaker is allowed if no result is reached within the given 90 minutes.

There are much worldwide international competition of football. One of the major international competitions in football is the World Cup organized by Fédération Internationale de Football Association (FIFA). Over 190 national teams compete in qualifying tournaments within the scope of continental confederations for a place in the finals. The finals tournament, which is held every four years, now involves 32 national teams competing.

There are many merits of the game. It develops the qualities of discipline, generosity, cooperation, carefulness, brotherhood, comradeship, etc. It also helps to improve the health of a player. Because it is a good means of taking physical exercise. It has some demerits too. Many students spoil their studies in their craze for football. Sometimes it creates quarrel among the players and spectators. It often becomes the cause of an accident. Because it is one of the risky games.

Football is undoubtedly a popular game. All classes of the people-old and young love this game very much. It is full of the thrill for both the players and the spectators. Sometimes the players enjoy the game more than the spectators. In a word, we can say that it gives us immense joy and pleasure.