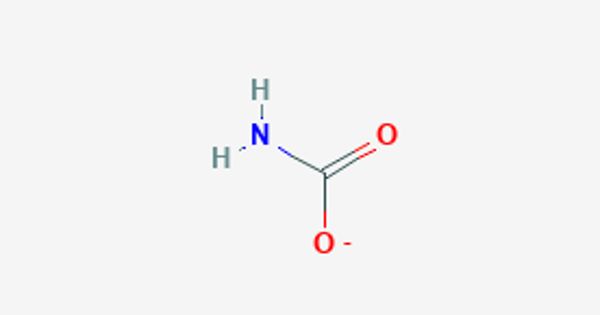 Carbamate – a Category of Organic Compounds

Carbamate is an amino-acid anion. It is a category of organic compounds that are formally derived from carbamic acid (NH2COOH). It is a conjugate base of carbamic acid. The term includes organic compounds (e.g., the ester ethyl carbamate), formally obtained by replacing one or more of the hydrogen atoms by other organic functional groups; as well as salts with the carbamate anion H2NCOO– (e.g. ammonium carbamate).

Polymers whose units are joined by divalent carbamate groups –NH–(C=O)–O– are an important family of plastics, the polyurethanes.

While carbamic acids are unstable, many carbamates (covalent or ionic) are stable and well known. The carbamates are a group of insecticides that includes such compounds as carbamyl, methomyl, and carbofuran.

Equilibrium with carbonate and bicarbonate

In water solutions, the carbamate anion slowly equilibrates with the ammonium NH4+ cation and the carbonate CO32- or bicarbonate HCO3– anions:

The salt ammonium carbamate is generated by treatment of ammonia with carbon dioxide: