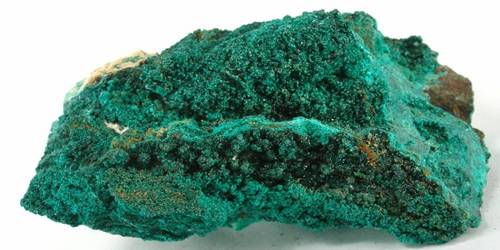 Brochantite is a sulfate mineral, one of a number of cupric sulfates. Its chemical formula is Cu4SO4(OH)6. It is formed from the oxidation of copper ore minerals along with other oxidation zone minerals. Formed in arid climates or in rapidly oxidizing copper sulfide deposits, it was named after Professor Andre Jean Francois Marie Brochant de Villiers (1772–1840), a French geologist and mineralogist associated with the School of Mines in Paris, France.

Crystals of brochantite can range from emerald green to black-green to blue-green and can be acicular or prismatic. Brochantite is often associated with minerals such as malachite, azurite, and chrysocolla, and may form pseudomorphs with these minerals. Brochantite can be identified in the field by its color variations, such as green, emerald-green, and black. This mineral has a vitreous-pearly luster with a pale green streak. The fracture of this mineral is brittle-conchoidal, meaning curved shavings or scrapings produced by a knife blade. The density of brochantite is 3.97 g/cm3 with a hardness of 3.5 to 4 – between a copper penny and fluorite. It is non-fluorescent.

Brochantite commonly occurs in the oxidized zone of copper deposits, and rarely in an ore. It is formed under low acidity, especially in arid regions. The mineral is found in a number of locations around the world, notably the southwestern United States (especially Arizona), Serifos in Greece and Chile.