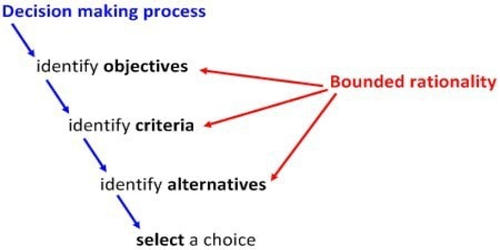 Bounded rationality is the term given to decision-making that attempts to make sense of the world by the way a person takes in information and processes it to create preferences and choices. It is the idea that rationality is limited, when individuals make decisions, by the tractability of the decision problem, the cognitive limitations of the mind, and the time available to make the decision. It is the idea that in decision-making, the rationality of individuals is limited by the information they have, the cognitive limitations of their minds, and the finite amount of time they have to make a decision. Decision-makers, in this view, act as satisficers, seeking a satisfactory solution rather than an optimal one.

Many economics models assume that people are on average rational, and can in large enough quantities be approximated to act according to their preferences. This is because we’re incapable of getting all the information out there and couldn’t even digest the information if we were able to get it in the first place. The concept of bounded rationality revises this assumption to account for the fact that perfectly rational decisions are often not feasible in practice because of the intractability of natural decision problems and the finite computational resources available for making them. This type of thinking is called “satisficing,” or doing the best you can with what you have.

Some models emphasize the roles of emotion in consumer decision making, while others view decision making as a biological phenomenon or a stimulus/response phenomenon. Some models of human behavior in the social sciences assume that humans can be reasonably approximated or described as “rational” entities, as in rational choice theory or Downs Political Agency Models.

How to Manufacture Niche Store

Benefits of Web Based Project Management