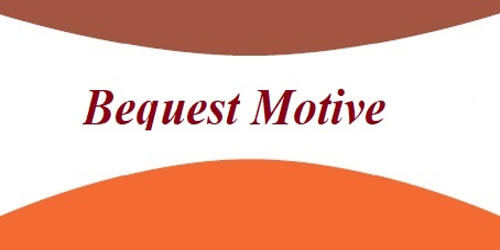 An acknowledged explanation for the lack of dissaving of the elderly in the life cycle hypothesis is the bequest motive. A bequest motive seeks to provide an economic justification for the phenomenon of intergenerational transfers of wealth. In other words, to explain why people leave money behind when they die. To examine the effect of the bequest motive on individuals’ savings behavior, it is important to clarify which proportion of savings originates from this behavior. Bequests can be made to family members, friends, institutions, or charities. When real estate is left through a will, it is called a device.

Which bequest motive theory most realistically represents the intentions of estate planners is unclear. Attempts to test the theories empirically are mired by poor availability of data about wealth holdings. They reasoned that cash saved in the present can be used in the future for precautionary purposes as well as for a bequest. It is important to note that the behavior of the heir can only be influenced if promises about the inheritance of the bequeathing individual are credible.

The elderly might decumulate wealth at a slower pace than the model prescribes, because they wish to engage in intergenerational transfers. The most common explanation for this is altruism, in which it is held that the disponer gains some form of satisfaction from knowing that his/her heirs will enjoy their inherited wealth. An example might be a parent leaving a child at the family home. If cash was not needed to finance unexpected events, it can be made available as a bequest to heirs as this provides the bequeathing individual utility.

A bequest is a financial term describing the act of giving assets such as stocks, bonds, jewelry, and cash, to individuals or organizations, through the provisions of a will or an estate plan. Another common explanation is an accidental bequest, developed by economists Yaari (1965) and Davies (1980). Here it is not assumed that the disponer (testator) gains any specific benefit from leaving a bequest, but rather that life is uncertain, and so she/he holds precautionary savings to insure him/herself against the risk of living too long. The different reasons to leave a bequest can broadly be categorized into paternalistic altruistic bequests, warm-glow altruistic bequests, strategic bequests, and unintended bequests. Unspent wealth at the time of death is transferred according to intestacy law.

A bequest is an act of shifting assets to individuals or organizations, through the provisions of a will or an estate plan. Finally, exchange bequest occurs where disponers engage in a sort of strategic game in which potential beneficiaries must render a (non-marketable) service in exchange for the promise of inherited wealth. The bequest motive can also be driven by strategic bequests. This kind of bequest is adopted to compensate heirs for providing services to the bequeathing individual. The most widely read model of exchange bequest was published by Bernheim, Summers, and Shleifer (1985). 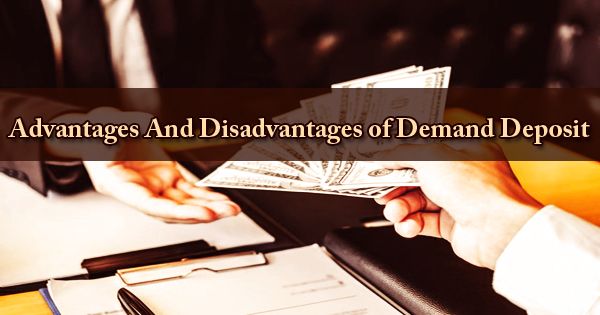 Advantages And Disadvantages of Demand Deposit