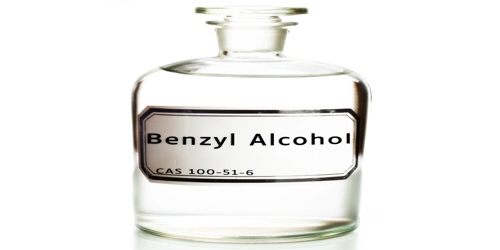 Benzyl alcohol appears as a clear colorless liquid with a pleasant odor. It is an organic compound with the chemical formula C6H5CH2OH. The IUPAC name of this compound is phenyl methanol. At room temperature, benzyl alcohol exists as a colorless liquid that has a mildly aromatic smell. When this aromatic alcohol is deprotonated, the resulting anion is called a benzylate or benzyloxide. Slightly denser than water. Flashpoint 194°F. Boiling point 401°F. Contact may irritate skin, eyes, and mucous membranes. May be slightly toxic by ingestion. Used to make other chemicals. It is a useful solvent due to its polarity, low toxicity, and low vapor pressure. Benzyl alcohol has moderate solubility in water (4 g/100 mL) and is miscible in alcohol and diethyl ether.

Benzyl Alcohol is an aromatic alcohol used in a wide variety of cosmetic formulations as a fragrance component, preservative, solvent, and viscosity-decreasing agent. Benzyl Alcohol is metabolized to Benzoic Acid, which reacts with glycine and excreted as hippuric acid in the human body. Acceptable daily intakes were established by the World Health Organization at 5 mg/kg for Benzyl Alcohol.

This compound consists of a hydroxyl group attached to a methyl group, which is in turn attached to an aromatic ring. The pi electrons in the benzene ring are delocalized due to resonance. Essentially, the structure of a benzyl alcohol molecule is that of a toluene molecule in which one of the hydrogen atoms has been replaced by a hydroxyl group.

Benzyl alcohol is produced industrially from toluene via benzyl chloride, which is hydrolyzed:

Another route entails hydrogenation of benzaldehyde, a by-product of the oxidation of toluene to benzoic acid.

An alternate method of preparing this compound involves the Grignard reaction between formaldehyde (H-CHO) and phenylmagnesium bromide (Ph-Mg-Br).

No adverse effects of benzyl alcohol have been seen in chronic exposure animal studies using rats and mice. Effects of Benzyl Alcohol in chronic exposure animal studies are limited to reduced feed intake and reduced growth. Some differences have been noted in one reproductive toxicity study using mice, but these were limited to lower maternal body weights and decreased mean litter weights. Another study also noted that fetal weight was decreased compared to controls, but a third study showed no differences between control and benzyl alcohol-treated groups.

Like most alcohols, it reacts with carboxylic acids to form esters. In organic synthesis, benzyl esters are popular protecting groups because they can be removed by mild hydrogenolysis.

Benzyl alcohol reacts with acrylonitrile to give N-benzylacrylamide. This is an example of a Ritter reaction:

This compound is widely used as a solvent for epoxy resin coatings, inks, and paints. Some other applications of benzyl alcohol are listed below.

Benzyl alcohol is toxic to neonates and is associated with gasping syndrome. It is severely toxic and highly irritating to the eye. Pure benzyl alcohol produces corneal necrosis. Benzyl alcohol is not considered to be a carcinogen, and no data are available regarding teratogenic or reproductive effects.

Benzyl alcohol has been widely used in human medicine as an antimicrobial preservative and as a local anesthetic and antipruritic. It has been used for toothache, a few drops being applied to the cavity or exposed nerve. Benzyl alcohol is active against Gram-positive bacteria and has some weak activity against gram-negative bacteria, yeasts, and molds. It also has some mild local anesthetic and anti-spasmodic properties. Benzyl alcohol is not approved for use in children younger than six months.