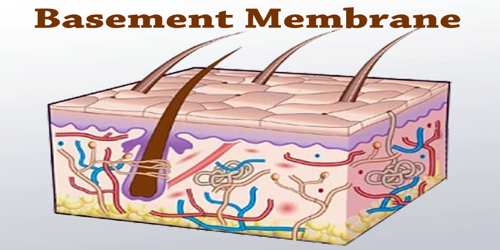 Basement membrane is a thin, delicate layer of connective tissue underlying the epithelium of many organs. It is also called basilemma. Basement membranes (BMs) are present in every tissue of the human body. All epithelium and endothelium is in direct association with BMs. BMs are a composite of several large glycoproteins and form an organized scaffold to provide structural support to the tissue and also offer functional input to modulate cellular function. 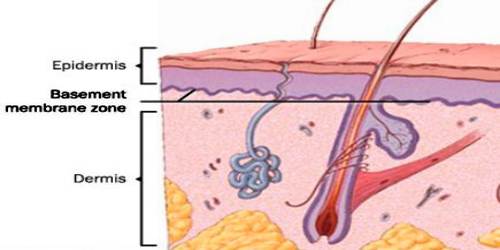 A group of diseases stemming from improper function of basement membrane zone are united under the name epidermolysis bullosa.

The structure of BMs and their functional role in tissues are unique and unlike any other class of proteins in the human body. Increasing evidence suggests that BMs are unique signal input devices that likely fine tune cellular function. Additionally, the resulting endothelial and epithelial heterogeneity in human body is a direct contribution of cell-matrix interaction facilitated by the diverse compositions of BMs.

Structure and Functions of Basement Membrane

Basment membrane is an amorphous extracellular layer closely applied to the basal surface of epithelium and also investing muscle cells, fat cells, and Schwann cells; thought to be a selective filter and to serve both structural and morphogenetic functions; it is composed of three successive layers (lamina lucida, lamina densa, and lamina fibroreticularis), a matrix of collagen, and several glycoproteins.

Basement membrane contains a unique collagen, type IV collagen, which is formed of pro α1(IV) (Mr=185,000) and pro α2(IV) (Mr=170,000) chains. Type IV collagen has been localized to the basement membrane lamina densa, a nonfibrillar structure. Laminin is a large (Mr=1,000,000) noncollagenous glycoprotein with chains of 200,000 and 400,000 daltons. It has been localized to the basement membrane lamina lucida and functions to bind epithelial cells to the basement membrane. The basal lamina layer can further be divided into two layers. The clear layer closer to the epithelium is called the lamina lucida, while the dense layer closer to the connective tissue is called the lamina densa. The electron-dense lamina densa membrane is about 30–70 nanometers thick, and consists of an underlying network of reticular collagen IV fibrils which average 30 nanometers in diameter and 0.1–2 micrometers in thickness. 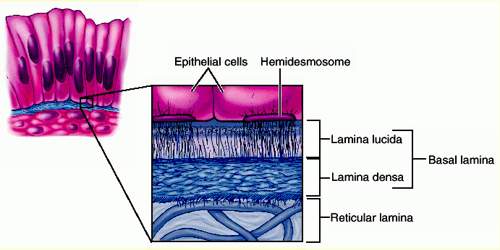