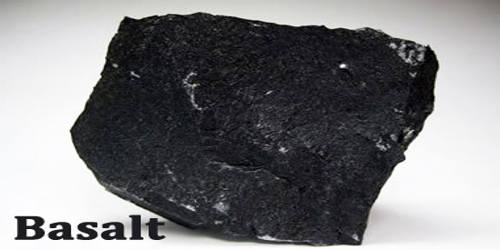 Basalt is a dark, fine-grained, igneous rock consisting mostly of plagioclase feldspar and pyroxene, and sometimes olivine. Basalt makes up most of the ocean floor and is the most common type of lava. It sometimes cools into characteristic hexagonal columns, as in the Giant’s Causeway in Anterim, Northern Island. It is the fine-grained equivalent of gabbro. The difference between basalt and gabbro is that basalt is a fine-grained rock while gabbro is a coarse-grained rock. 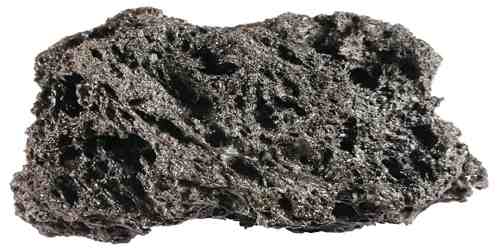 Basalts are composed primarily of magnesium oxide (MgO) and calcium oxide (CaO). They are very low in silicon (SiO2), usually less than 50 percent. They also contain some iron oxide (FeO) and aluminum oxide (Al2O3). As a result, they are very dark in color, and usually appear as shades of black and black-green. Occasionally, some red or orange colors can appear in basalts and are due to that particular basalt containing rusting iron compounds. Basalt is an igneous rock that forms from the cooling and crystallization of magma. And usually, magma is formed from the melting of dark colored peridotite and pyroxene-rich rocks. There are some lighter colored basalts found, which form when a basalt magma contains a higher than normal amount of calcium or sodium minerals.

Basalt underlies more of Earth’s surface than any other rock type. Most areas within Earth’s ocean basins are underlain by basalt. Although basalt is much less common on continents, lava flows and flood basalts underlie several percent of Earth’s land surface. Basalt is a very important rock.

Basalt is a type of lava that the rocks of the mantle make when they start to melt. Midocean-ridge basalt is so important a part of Earth’s geochemistry that specialists just call it “MORB.” However, the oceanic crust is constantly recycled into the mantle by plate tectonics. Therefore MORB is rarely seen, even though it is the majority of the world’s basalt. 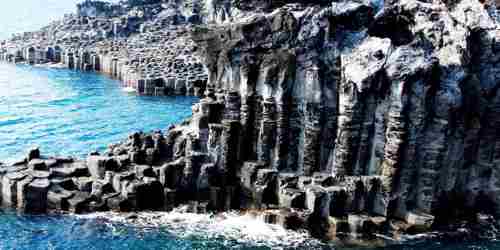 The upper part of the mantle consists of the rock peridotite, which is even more mafic than basalt, so much more so that it’s called ultramafic. Where the Earth’s plates are pulled apart, at the mid-ocean ridges, the release of pressure on the peridotite makes it start to melt—the exact composition of the melt depends on many details, but in general it cools and separates into the minerals clinopyroxene and plagioclase, with smaller amounts of olivine, orthopyroxene and magnetite.

Occurrences and Formation of Basalt

On Earth, most basalt magmas have formed by decompression melting of the mantle. Basalt commonly erupts on Io (the third largest moon of Jupiter), and has also formed on the Moon, Mars, Venus, and the asteroid Vesta. 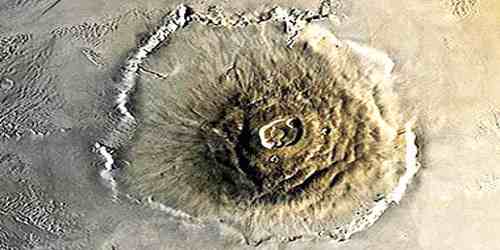 Olympus Mons is a shield volcano on Mars. It, like most other volcanic features on Mars, was formed from basaltic lava flows.

The crustal portions of oceanic tectonic plates are composed predominantly of basalt, produced from upwelling mantle below, the ocean ridges. 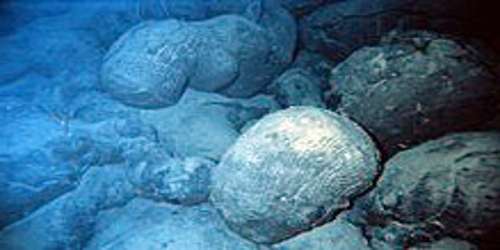 The common corrosion features of underwater volcanic basalt suggest that microbial activity may play a significant role in the chemical exchange between basaltic rocks and seawater. The significant amounts of reduced iron, Fe(II), and manganese, Mn(II), present in basaltic rocks provide potential energy sources for bacteria. Some Fe(II)-oxidizing bacteria cultured from iron-sulfide surfaces are also able to grow with basaltic rock as a source of Fe(II). Fe- and Mn- oxidizing bacteria have been cultured from weathered submarine basalts of Loihi Seamount. The impact of bacteria on altering the chemical composition of basaltic glass and seawater suggest that these interactions may lead to an application of hydrothermal vents to the origin of life. 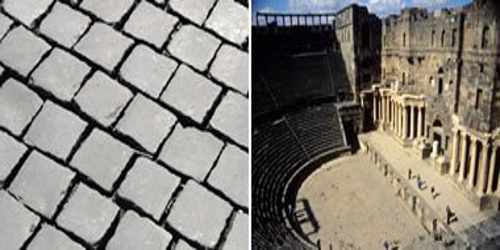 Basalt is used for a wide variety of purposes. It is most commonly crushed for use as an aggregate in construction projects. Crushed basalt is used for road base, concrete aggregate, asphalt pavement aggregate, railroad ballast, filter stone in drain fields, and may other purposes. Basalt is also cut into dimension stone. Thin slabs of basalt are cut and sometimes polished for use as floor tiles, building veneer, monuments, and other stone objects.