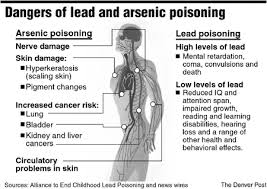 Arsenic is a heavy metal that exists in 3 metallic forms, alpha or yellow, beta or black and gamma or grey. It also exists in compounds that may be inorganic or organic. It has been used in medicines, as a pigment, a pesticide, and as a weapon of murder. It shares many toxic features with the other heavy metals like mercury and lead. It is used in the production of glass and semiconductors. It is found in some water supplies and seafood.

Arsenic poisoning occurs through industrial pollution, from water supplies, from contaminated wine or illicit spirits, or from criminal intent. Heavy metal contamination can occur in herbal preparations and nutritional supplements.

The most deadly form of arsenic is arsine. It is a gas with the formula AsH3. It has been suggested as a possible weapon to be used by terrorists. Organic arsenic compounds are often called arsines. The simplest is triphenylarsine with a formula As (C6H5) 3. Arsine is used in the manufacture of semiconductors and the manufacture of organic arsines.

Arsenic’s Name in Other Languages

Sources
Sources of arsenic include:

• Pesticides
• Herbicides
• Fungicides
• Wood preservatives
• Ceramic enamels
• Paints
• Tobacco (there may be as much as 6 micrograms per pack)
• Burning of fossil fuels as arsenic is a contaminant
• From the diet, as organic arsenic from fish and seafood
• Illicit whiskey (moonshine) is a possible source of arsenic poisoning.

Occupational exposure can occur in:

• Arsenic exposure is usually occupational but can result from deliberate poisoning.
• Take a work history when a patient presents with painful peripheral neuropathy.
• Exposure to arsine gas is usually the result of an industrial accident and the worker presents rapidly with the fact.
• Unusual cases require a careful history regarding dietary and nutritional habits, hobbies, and alcohol abuse.

• Children may encounter arsenic trioxide as a rodenticide or herbicide. Examine for both arsenic and cholinesterase-inhibitor exposure. Possible transdermal absorption from exposure to pressure-treated wood, now banned for use by the US EPA, has been reported.
• Adults may be exposed through work in a metal foundry, mining, glass production, or the semiconductor industry.
• Arsenic has been found to contaminate such common items as wine, glues, and pigments.

• Within 30 minutes of exposure there is a metallic taste in the mouth and slight odor of garlic in the breath along with dry mouth and dysphasia.
• This is followed abruptly by severe nausea and vomiting, colicky abdominal pain and profuse diarrhea, sometimes bloody with rice water stools.
• If a large amount has been ingested, cyanosis, cold clammy extremities, hypoxic encephalopathy, convulsions and acute tubular necrosis may occur following shock. Hyperpyrexia, pulmonary edema and acute hemolytic may also occur.
• With a smaller amount the patient will have severe headache, vertigo, periorbital edema, skeletal muscle cramping and evidence of renal damage manifested as oliguria, proteinuria, and haematuria.
• If death does not occur in the first few hours from shock, the patient may die a few days later from acute liver failure or renal failure.
• Cardiac manifestations include acute cardiomyopathy, subendocardial hemorrhages, and ECG changes of prolonged QT interval and non-specific ST and T wave changes. There is risk of ventricular fibrillation.
• If the patient survives, then 2 to 4 weeks after ingestion there is hair loss, Mee’s lines that are white transverse lines seen on the nail plate up to a year after arsenic ingestion, sensorimotor peripheral neuropathy that is usually seen 2 to 8 weeks
• Afterexposure, skin changes as in chronic poisoning and possibly chronic renal failure.

This is much more insidious and difficult to diagnose.
• The earliest skin lesions are persistent erythematous flushing. Hyperkeratosis follows with desquamation of the palms and soles, pigmentation changes, brittle nails with Mee’s lines, patchy or diffuse alopecia and edema of the face, periorbital region or ankles.
• Bowen’s disease is a long-term complication of chronic arsenic poisoning and is pre-malignant.
• Neuropathy is characteristic. It is usually a symmetrical sensory-motor polyneuropathy with paraesthesia, numbness, and pain, particularly of the soles of the feet. Eventually, muscular atrophy and ataxia are seen.
• Encephalopathy may occasionally occur, with severe headache, personality disturbance, convulsions or coma.
• Other features of chronic arsenic poisoning are nausea, vomiting, diarrhoea and irritability.
• There can be hepatic and renal damage.

While arsenic has been in use since ancient times, in applications such as the hardening of bronze, its discovery has been attributed to Albertus Magnus in 1250AD. He isolated arsenic when he heated soap and orpiment (arsenic trisulphide, As2S3).

Although arsenic can be found in elemental form, it is most commonly found in minerals such as Misspoke (arsenopyrite, FeSAs) which is found in France, Germany, Italy, Romania, Siberia and North America.

Arsenic is also found in other minerals such as:

Chemical reactions of the elements

Reaction of arsenic with air

Arsenic is stable in dry air, but the surface oxidizes slowly in moist air to give a bronze tarnish and finally a black covering to the element. When heated in air, arsenic ignites “arsenic trioxide” – actually tetra arsenic hexaoxide, As4O6. This is accompanied by phosphorescence under some conditions. When heated in oxygen, arsenic ignites in oxygen to form “arsenic pentoxide” – actually tetra arsenic decaoxide, As4O10, and As4O6.

Diagnosis
Other forms of poisoning like lead, mercury and botulism, gastroenteritis and hemolytic uraemic syndrome. The skin lesions look like other forms of dermatitis.

• FBC will reveal a hypo chromic, microcytic anemia as with all heavy metal poisoning although interference with float metabolism can produce a megaloblastic picture. Arsine produces hemolytic anemia.
• Urea, creatinine and electrolytes to assess renal function.
• Liver function tests.
• Blood levels of arsenic should be less than 50 micrograms per liter. In poisoning the figure is often several hundreds to several thousands.
• Nerve conduction studies may confirm peripheral neuropathy.
• In acute poisoning an ECG can reveal arrhythmias.
• Plain abdominal x-ray may show opacities in the stomach as arsenic is a heavy metal.
• 2 to 4 weeks after ingestion arsenic is bound to keratin in skin, nails and hair. Analysis of hair is often used.

Non-Drug
• Once arsenic is in the tissues treatment may be to no avail, so efforts should be made to remove arsenic from the body before it reaches the tissues. Gastric lavage is used.
• Haemodialysis at an early stage can clear a substantial amount of arsenic.
• In arsine exposure, severe hemolytic can be life threatening despite chelation therapy. Multiple transfusions and even exchange transfusion may be necessary.
• In the acute condition, blood and fluid loss will need replacement. Chelation therapy and haemodialysis should be implemented as soon as possible.

Drugs
• Dimercaprol is the first-line agent for treating arsenic poisoning. Other chelating agents are sometimes used.
• The results of treatment with vitamin E and selenium are unimpressive.5
• Pain may require strong analgesics.

Bangladesh was proud that 97% of its population had access to piped water. This was free of bacterial contamination that caused so much disease but it later transpired that much of the piped water was high in arsenic. It is estimated that 29-77 million Bangladeshis i.e. 23 – 62 % of the 125 million populations are at risk of arsenic poisoning. According to some estimates, arsenic in drinking water will cause 5 million deaths in Bangladesh. The World Health Organization (WHO) has called it the “largest mass poisoning of a population in history”. Other countries including the USA, Mexico, China and Chile have discovered arsenic in their water supplies. Chronic arsenic poisoning is likely to become an international health issue and requires research and awareness worldwide. Exactly how arsenic gets into water-soluble form in groundwater remains controversial but some plants have the ability to remove arsenic from the environment.

Frequency
Sex
Men are more likely to experience industrial arsenic exposure than women.
Age
As in many reported cases of poisoning, the majority of reports of exposure to arsenic-containing pesticides occur with children younger than 6 years as the victim, whereas, when nonpesticide arsenic exposure is involved, the majorities are in adults older than 19 years.

Further Inpatient Care
• Many patients will develop profound peripheral motor palsies requiring extensive rehabilitation. Rehabilitation should be started as promptly as the clinical picture allows.
Further Outpatient Care
• Perform a careful neurological evaluation in follow-up of all patients because the peripheral neuropathy, which may develop after an acute exposure, may not appear for 2-3 weeks.

Complications
Sterile abscesses after the use of dimercaprol (BAL in Oil) are not unusual. They initially may appear like erythematous macules, which spread or coalesce and may continue to drain for some time.
Patient Education
• For excellent patient education resources, visit medicine’s Bioterrorism and Warfare Center. Also, see medicine’s patient education article Chemical Warfare.

Medical/Legal Pitfalls
• Failure to immediately report all suspicious cases to an appropriate law enforcement agency (If someone presents with arsenic toxicity and the cause is not obvious, a malicious etiology may be involved.)
• Special Concerns
• Checking the patient’s family members for exposure is important because a good chance exists that they may also have been exposed to arsenic toxicity.