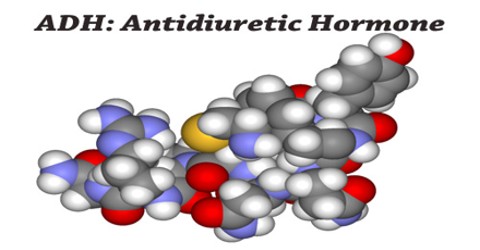 A syndrome of inappropriate secretion of ADH results in the inability to put out dilute urine perturbs fluid and electrolyte balance, and causes nausea, vomiting, muscle cramps, confusion and convulsions. This syndrome may occur in association with oat-cell lung cancer, pancreatic cancer, prostate cancer, and Hodgkin’s disease as well as a number of other disorders.

ADH is produced in the hypothalamus and stored in the pituitary gland. It’s released from there into the bloodstream, and it affects how the kidneys work by letting them know how much water they need to keep in or get out of the body. Patients with central diabetes insipidus are often extremely tired because their sleep is frequently interrupted by the need to urinate. Their urine is clear, odorless, and has an abnormally low concentration of particles.

Central diabetes insipidus can lead to severe dehydration if it’s left untreated. Our body won’t have enough water to function.

This disorder is not related to the more common diabetes mellitus, which affects the level of the hormone insulin in our blood.

Antidiuretic Hormone or ADH regulates the body’s water retention. It is released from the brain when the body is dehydrated and causes the kidneys to conserve water, thus concentrating the urine and reducing urine volume. At high concentrations, it also raises blood pressure by inducing moderate vasoconstriction. In addition, it has a variety of neurological effects on the brain, having been found, for example, to influence pair-bonding in voles. The high-density distributions of vasopressin receptor AVPr1a in prairie vole ventral forebrain regions have been shown to facilitate and coordinate reward circuits during partner preference formation, critical for pair bond formation. Aquaporins are like doors in a nightclub; they let water in and out of the cell. When the doors open, people enter and leave, but because the nightclub is empty, more people go in, rather than out. Similarly, when there is more water inside the nephron than in the blood, when the gates open, water flows in the blood. This causes the body to hold more water and increases the volume of blood, which in turn, increases blood pressure.