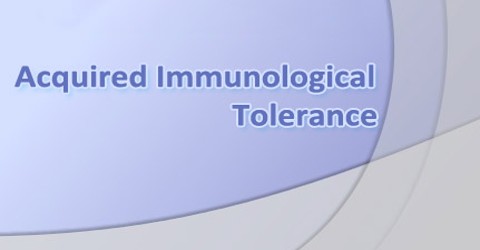 Tolerance can be induced (tolerization) in all of the cells of the immune system, including T cells (also known as T lymphocytes), the antibody-forming B cells (also known as B lymphocytes), and natural killer cells. Artificially induced immunological tolerance can be helpful in a number of clinical settings. Inducing self-tolerance in the immune system could be an approach to curing autoimmune diseases. Acquired Immunological Tolerance of heterologous cells is of much lower degree than tolerance of homologous cells. In experimental embryonal parabiosis, a large quantity of powerful antigenic stimulus is administered; this acts for a relatively long time during the ‘adaptive period’ and usually results in the formation of cell chimeras. A relatively high degree of heterologous tolerance was sometimes obtained by this method, for a prolonged survival of heterografts has been found in turkey–chicken parabionts1, and an interspecific blood chimera demonstrated.

Many strategies for inducing immunological tolerance involve reproducing the mechanisms involved in natural central tolerance—the phenomenon by which self-tolerance is maintained among immature lymphocytes developing in the central lymphoid organs. For developing T cells, tolerance occurs in the thymus, the central organ for T cell development. For B cells, development occurs in the bone marrow, and an encounter with self antigens can induce tolerance there among the immature cells. In 1960, Macfarlane Burnet and Peter Medawar won the Nobel Prize in Physiology or Medicine for the discovery of acquired immunological tolerance. The core of this discovery was the development of the concept of self/non-self-discrimination, first introduced by Burnet and Fenner in 1949: ‘if in embryonic life expendable cells from a genetically distinct race are implanted and established, no antibody response should develop against the foreign cell antigen when the animal takes on independent existence’. From this logical yet novel premise, many of the core principles of immunology have been unravelled—from the earliest stages of lymphocyte differentiation to the principles of clinical autoimmunity.

Burnet developed the concept that the immune system develops predicicted that it would be experimentally possible to fool a body into believing that a foreign substance was ‘self’. These experiments were carried out by Medawar, who performed tissue grafts on twin calves and in mice. The large number of inbred mice available was an advantage, because there was little genetic variation between mice from the same litter. Foreign tissue was introduced into mouse embryos whilst still in the womb, and the young mice were then allowed to develop normally. When tissue grafts were performed on these mice, they had no immune reaction if the tissue was the same type that had been introduced in the womb. However, they reacted strongly to the grafting of other foreign tissue.

It is now 50 years since Burnet and Medawar won the Nobel Prize, and Burnet’s ‘hypothesis that called for experiment’ has driven an enormous amount of progress.

The feature starts with a focus on the unexpected complexity added to immunological tolerance when Zinkernagel, Bevan and Doherty demonstrated that T cells require MHC interactions for positive selection. Labrecque, Baldwin and Lesage discuss the complex molecular controls that allow a single ligand to control the three crucial, yet diametrically opposed, responses—positive selection into the naive population, elimination from the precursor pool and expansion during the effector phase.

In light of the advances made over the past 50 years, Burnet was prescient about the revolution that the hypothesis of immunological tolerance would drive: He have introduced ideas about the evolution of the process of self-recognition because as a biologist he believe we know less about the processes of differentiation and morphogenesis than about any other major field in biology. There is an insistent suggestion that immunological self-recognition is derived from the processes by which morphological and functional integrity is maintained in large and long-lived multicellular organisms. This may be a mere cobweb of phantasy but in my more optimistic moments he could hope that it might also function like Ariadne’s thread to guide us effectively through part of that biological labyrinth, the process of differentiation. Tolerization can also be used to facilate organ transplantation. Despite improvements in immunosuppressive drug therapy, teaching the immune system to regard a set of foreign antigens presented by the organ graft as self (that is, tolerance induction) has become an important goal for several reasons: (1) It would eliminate the need for chronic immunosuppressive therapy, which is associated with lifelong increased risks of infection and malignancy, and other side effects. (2) It would prevent chronic rejection (a major problem even with immunosuppressive therapy), which often leads to late graft loss. (3) It presents a less toxic alternative to the unacceptably high levels of nonspecific immunosuppressive therapy that would likely be required to prevent rejection of xenografts (grafts from a donor of another species).