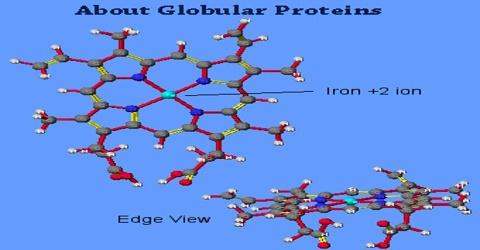 Globular proteins are somewhat water-soluble (forming colloids in water), unlike the fibrous or membrane proteins. In a globular protein, the amino acid chain twists and folds in a manner that enhances the protein’s solubility in water by placing polar groups of atoms at the protein’s surface, where they can participate in attractive interactions with water molecules. There are multiple fold classes of globular proteins, since there are many different architectures that can fold into a roughly spherical shape. Globular proteins also function as anti-bodies in the body’s immune system and as transport vehicles for other molecules in circulating blood, and they are heavily involved in the replication and repair of DNA.

Most proteins which occur in the aqueous, intracellular environment or in the plasma are of globular nature: they are very approximately spherical in shape, or consist of several different lobes (domains). Generally, proteins with more than about 200 amino acid residues are multi-domain. The different domains of a single protein may be responsible for quite different functions.

Unlike human-sized machines, which are often built from a bewildering variety of different parts, globular proteins are put together from one class of components, called amino acids. There are 20 different types of amino acids. A protein consists of a unique combination of amino acids drawn from this 20-member library. The amino acids that make up a protein are linked together into long linear chains, like a train made up of lots of individual box cars connected together, one after another. Some globular proteins, such as hemoglobin, also exhibit quaternary structure, in which multiple polypeptide chains are clustered together to form a functional protein. The shape of globular proteins is critical to their function. Those acting as enzymes, for example, must be folded such that their active sites are in the correct orientation and conformation to interact with their substrates.

Changes in environmental conditions, such as pH or temperature, may affect the bonds that contribute to the shape of globular proteins. These changes can lead to denaturation in which the shape of the protein is so altered that it is no longer functional. In the case of your eggs at breakfast, the heat used in cooking the eggs denatures the ovalbumin and other proteins in the egg whites, causing them to unfold and clump together into a yummy conglomeration of goodness.

Diseases are Caused by Errors in Protein Structure

A plane can’t fly unless all its parts are put together in the right way. The same is true for proteins. So true, in fact, that anyone can think of many diseases as errors of protein structure: something happens in the body that causes a protein to lose an aspect of its native conformation, and this loss of structure causes a loss of function. The example of changes in protein structure that lead to disease happens in something called fatal familial sleeping sickness. The main symptom of this disease, as the name suggests, is permanent, incurable, and ultimately deadly insomnia. Like sickle cell anemia, the cause is a mutation that leads to a malformation of a protein, called major prion protein.