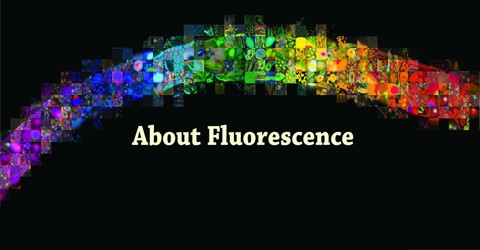 Fluorescence is a form of luminescence, which is the emission of light not attributed to thermal radiation, that occurs over very short time scales – around 10-9 – 10-7s. The first fluorescent substance to be observed and recorded was quinine sulphate a key ingredient in tonic water. The most striking example of fluorescence occurs when the absorbed radiation is in the ultraviolet region of the spectrum, and thus invisible to the human eye, while the emitted light is in the visible region, which gives the fluorescent substance a distinct color that can only be seen when exposed to UV light. Fluorescent materials cease to glow immediately when the radiation source stops, unlike phosphorescence, where it continues to emit light for some time after. Fluorescence has many practical applications, including mineralogy, gemology, medicine, chemical sensors (fluorescence spectroscopy), fluorescent labelling, dyes, biological detectors, cosmic-ray detection, and, most commonly, fluorescent lamps. Fluorescence also occurs frequently in nature in some minerals and in various biological states in many branches of the animal kingdom. Strongly fluorescent pigments often have an unusual appearance which is often described colloquially as a “neon color.” This phenomenon was termed “Farbenglut” by Hermann von Helmholtz and “fluorence” by Ralph M. Evans. It is generally thought to be related to the high brightness of the color relative to what it would be as a component of white. Fluorescence shifts energy in the incident illumination from shorter wavelengths to longer and thus can make the fluorescent color appear brighter (more saturated) than it could possibly be by reflection alone.

Fluorescence is generated when a material absorbs high-energy photons and then emits photons of lower energy. The Optical Microscopy Division of the National High Magnetic Field Laboratory at Florida State University explains that when a fluorescent material absorbs a photon, the excess energy is lost as heat that is subsequently absorbed by neighboring molecules in the material. As a result, photons are re-emitted at lower energies that are now within the range visible to the human eye, making the material appear to glow. Therefore, in order for fluorescent materials to fluoresce, they normally need to be exposed to higher energy light, such as ultraviolet light. Biofluorescence is the absorption of electromagnetic wavelengths from the visible light spectrum by fluorescent proteins in a living organism, and the reemission of that light at a lower energy level. This causes the light that is re-emitted to be a different color than the light that is absorbed. Stimulating light excites an electron, raising energy to an unstable level. This instability is unfavorable, so the energized electron is returned to a stable state almost as immediately as it becomes unstable. This return to stability corresponds with the release of excess energy in the form of fluorescent light. This emission of light is only observable when the stimulant light is still providing light to the organism/object and is typically yellow, pink, orange, red, green, or purple. Biofluorescence is often confused with the following forms of biotic light, bioluminescence and biophosphorescence. Use Fluorescence for Monitoring Water Quality

A significant proportion of chromophoric (light absorbing/coloured) organic matter is fluorescent when excited by light in the UV region. Distinct fluorescent peaks have been identified and related to certain ‘types’ of organic matter. For example, humic-like or CDOM fluorescence can be traced back to terrestrial production by vascular plants. Microbial or protein – like fluorescence is largely related to in-stream production by algae and bacteria. These peaks show strong relationships with conventional water quality parameters such as Total Organic Carbon and Biochemical Oxygen Demand.