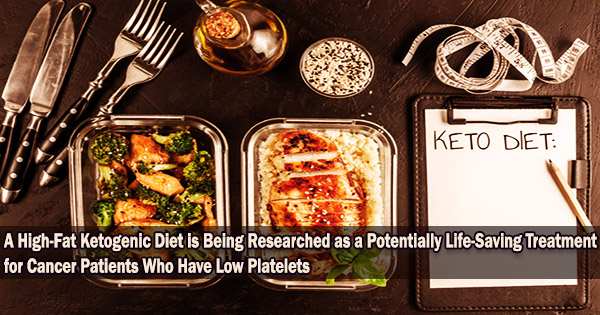 Preliminary research reveals that a ketogenic eating plan may be a nontoxic, low-cost, and high-benefit adjunct to cancer therapy. It suggests that a high-fat diet may help counteract decreased platelet counts in the blood induced by chemotherapy.

Xie, a researcher in the department of Cellular and Genetic Medicine at the School of Basic Medical Sciences, Fudan University in Shanghai, underscored that chemotherapy-induced thrombocytopenia is a major problem facing oncologists and cancer patients worldwide.

The little, disc-shaped platelets that form blood clots are a component of the blood supply. Thrombocytopenia, which can be harmful, is the outcome of chemotherapy destroying platelets. The syndrome makes cancer procedures more difficult by raising the danger of bleeding, requiring medical professionals to scale back or stop treatment completely.

According to a series of elegant experiments and clinical research carried out by the Shanghai team, Xie and colleagues discovered that a ketogenic diet can increase the production of ketone bodies in the liver, which in turn have various biological effects, one of which is combating thrombocytopenia.

When glucose is not readily available, ketone bodies can be used as an alternative energy source. Ketogenic diets drastically reduce the number of calories from carbohydrate sources by focusing on foods high in fat and protein. Three ketone bodies are present. Beta-hydroxybutyrate and acetoacetate are the two most prevalent; acetone is the third and least prevalent.

The results that Xie and colleagues discovered were borderline spectacular: they discovered that the diet altered the bone marrow, which increased the amount of circulating platelets. A ketogenic diet may one day serve as a potential thrombocytopenia preventative for chemotherapy patients if the results from animal models and a small number of human volunteers hold up to further examination.

In five healthy participants, switching to a ketogenic diet for seven days increased platelet counts to acceptable levels. The Shanghai researchers also looked at retrospective data from 28 chemotherapy-treated cancer patients and found that 17 of them had greater platelet counts and fewer bouts of chemotherapy-induced thrombocytopenia.

The Shanghai team still sees the possibility of reducing medical expenditures if the dietary approach is successful as a therapeutic alternative, despite the fact that it is still far from a home run at this time. Platelet transfusions and other recombinant therapies, which are currently used to treat thrombocytopenia, are either prohibitively expensive or come with a high risk of adverse effects.

The researchers propose that by using a dietary strategy, the prevention of chemotherapy-induced thrombocytopenia may someday be added to the list of medical disorders for which high-fat diets are being investigated or professionally advised.

Ketogenic diets have been tested in patients with diabetes and cancer. Ketogenic diet programs have long been used to treat epilepsy, especially the severe forms of the ailment that affect youngsters.

In general, ketogenic diets are dietary regimens that are rich in fat, high in protein, and very low to no in carbohydrates. They are frequently used as diet plans. However, the diets have had the best results in people with difficult-to-control epilepsy.

The diet causes the body to burn fat for energy instead of using carbohydrates. According to Xie and colleagues, this type of nutrition may help avoid chemotherapy-induced thrombocytopenia because it stimulates the generation of healthy new platelets by causing activity in the bone marrow.

In contrast, the diet is effective in treating epilepsy because it significantly lowers the level of glucose, the main source of energy for cells and the brain’s preferred energy source. In some individuals predisposed to epilepsy, glucose is linked to severe seizures.

The ketogenic diet has a long history that is both medical and scriptural, dating back more than a century. The diets owe their development to doctors in the 1920s, working independently at Johns Hopkins University in Maryland and the Mayo Clinic in Minnesota. Both teams were studying epilepsy.

Following observations of the flamboyant faith healer Bernard Macfadden, doctors at the two institutions during that time period appropriately interpreted what was occurring chemically in the brain. People with epilepsy were put on prayer and fasting regimens by the hellfire-and-brimstone preacher of the early 20th century.

Huge numbers of people sought out McFadden’s “cures” for epilepsy. Seizure-prone patients, including those with the most severe forms of epilepsy, were seizure-free for as long as fasting persisted and people were without food for weeks. Seizures started to occur again after eating normally again.

Medical historians believe Macfadden likely read two key biblical passages. According to Matthew 17:14–21 and Mark 9:14–29, Jesus praised the virtues of prayer and fasting as efficient cures for a disease that can be interpreted as epilepsy while speaking to his disciples.

The Hopkins and Mayo Clinic experts were the first to recognize that a high-fat diet can support ketone synthesis without starving patients as Macfadden was doing.

The Shanghai team now believes that a high-fat diet may prevent chemotherapy-induced thrombocytopenia in cancer patients. However, the researchers are quick to point out that larger-scale prospective clinical studies are required to confirm the therapeutic efficacy of ketogenic dietary regimens to treat thrombocytopenia.