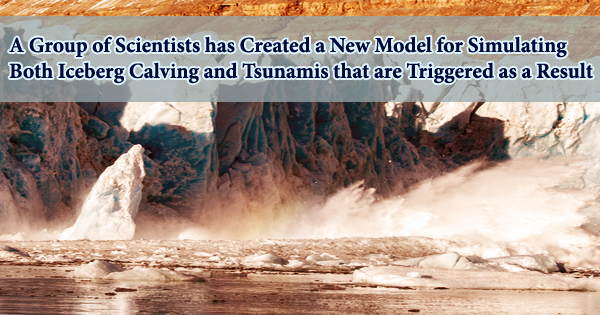 Johan Gaume, an avalanche and geomechanics expert at EPFL, has turned his focus to ice. His objective is to learn more about the relationship between an iceberg’s size and the size of the tsunami that occurs from its calving. Gaume recently revealed a novel approach for simulating these occurrences with a team of experts from different academic organizations.

Their research is published in Communications Earth & Environment, a new Nature Research publication. These researchers are the first to model both glacier breakup and wave generation as an iceberg crashes into the seas.

“Our goal was to model the explicit interaction between water and ice but that has a substantial cost in terms of computing time. We opted to use a continuum model because it is highly strong numerically and produces findings that are both conclusive and compatible with most of the experimental data,” explains Gaume, the corresponding author of the paper and the head of EPFL’s Snow Avalanche Simulation Laboratory (SLAB).

The breaking of ice chunks off the edge of a glacier is known as ice calving, glacier calving, or iceberg calving. It’s an ice ablation or ice disturbance technique. Calving is a significant mass loss mechanism for the world’s ice sheets, accounting for about a third of the current mass loss from the Greenland Ice Sheet. Calving is particularly crucial for the stability of marine-terminating glaciers since an early calving retreat can destabilize the grounding line and cause the glacier to accelerate.

The approach used by the scientists might potentially shed light on the precise mechanisms involved in glacial rupture. “Researchers can use the results of our simulations to refine the calving laws incorporated into their large-scale models for predicting sea-level rises while providing detailed information about the size of icebergs, which represent a sizeable amount of mass loss,” says Gaume.

When pieces of ice on the edge of a glacier break off and fall into the sea, this is known as calving. The processes that cause the rupture are typically dependent on the water level. The iceberg breaks off from the top of the glacier if the water level is low. Many glaciers end in seas or freshwater lakes, resulting in enormous quantities of icebergs calving naturally. Each year, the calving of Greenland’s glaciers produces 12,000 to 15,000 icebergs.

If the water level is high, the iceberg will be longer and will break off from the bottom before rising to the top due to buoyancy. These various mechanisms result in icebergs of various sizes and, as a result, waves of various amplitudes. Despite its importance, complete knowledge of iceberg calving remains difficult for several reasons: its processes occur on glaciers all over the planet across a wide variety of time and length scales.

“Another event that can trigger a tsunami is when an iceberg’s center of gravity changes, causing the iceberg itself to rotate,” says Gaume. “We were able to simulate all these processes.”

The scientists installed a network of sensors in Greenland at Eqip Sermia, a 3-kilometer-wide outflow glacier of the Greenland ice sheet that terminates in a fjord with a 200-meter-high ice cliff. In 2014, an iceberg the size of 300 Olympic swimming pools broke off the front of the glacier, causing a 50-meter-high tsunami; the wave was still 3 meters high when it hit the first inhabited coastline, which was 4 kilometers distant.

The researchers used large-scale field datasets from Eqip Sermia as well as empirical data on tsunami waves collected in a laboratory basin at the Deltares Institute in the Netherlands to evaluate their modeling technique.

Projects in the pipeline

As a result of global warming, glacier melting has become a significant study topic. With support from the Swiss National Science Foundation, one of the University of Zurich experts participating in the study began a new research initiative this year. By integrating data from various field experiments in Greenland with the results of simulations conducted using the SLAB model, this project will examine the dynamics of Greenland’s fastest-moving glacier, Jakobshavn Isbrae.

“Our method will also be used to model chains of complex processes triggered by gravitational mass movements, such as the interaction between a rock avalanche and a mountain lake,” says Gaume.