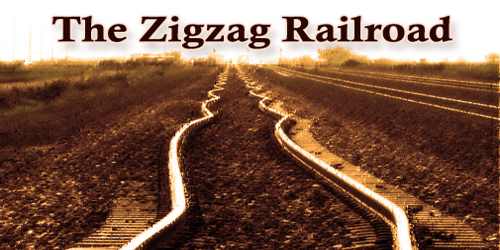 One day Gimme the Ax said to himself, “Today I go to the post office and around, looking around. Maybe I will hear about something happening last night when I was sleeping. Maybe a policeman began laughing and fell in a cistern and came out with a wheelbarrow full of goldfish wearing new jewelry. How do I know? Maybe the man in the moon going down a cellar stairs to get a pitcher of buttermilk for the woman in the moon to drink and stop crying, maybe he fell down the stairs and broke the pitcher and laughed and picked up the broken pieces and said to himself, ‘One, two, three, four, accidents happen in the best-regulated families.’ How do I know?”

So with his mind full of simple and refreshing thoughts, Gimme the Ax went out into the backyard garden and looked at the different necktie poppies growing early in the summer. Then he picked one of the necktie poppies to wear for a necktie scarf going downtown to the post office and around looking around.

“It is a good speculation to look nice around looking around in a necktie scarf,” said Gimme the Ax. “It is a necktie with a picture like whiteface pony spots on a green frog swimming in the moonshine.”

So he went downtown. For the first time, he saw the Potato Face Blind Man playing the accordion on the corner next nearest the postoffice. He asked the Potato Face to tell him why the railroad tracks run zigzag in the Rootabaga Country.

“Then the zizzies came. The zizzy is a bug. He runs zigzag on zigzag legs, eats zigzag with zigzag teeth, and spits zigzag with a zigzag tongue.

“Millions of zizzies came hizzing with little hizzers on their heads and under their legs. They jumped on the rails with their zigzag legs, and spit and twisted with their zigzag teeth and tongues till they twisted the whole railroad and all the rails and tracks into a zigzag railroad with zigzag rails for the trains, the passenger trains, and the freight trains, all to run zigzag on.

“Then the zizzies crept away into the fields where they sleep and cover themselves with zigzag blankets on special zigzag beds.

“They worked hard. They made the railroad straight again. They looked at the job and said to themselves and to each other, ‘This is it, we done it.’

“After that, the zizzies went to breakfast. And they said to themselves and to each other, the same as the shovel-men, the smooth engineers and the steam hoist and operating engineers, ‘This is it we done it.’”

“So that is the how of the which it was the zizzies,” said Gimme the Ax.

“Yes, it was the zizzies,” said the Potato Face Blind Man. “That is the story told to me.”

“Two little zizzies. They came to me one cold winter night and slept in my accordion where the music keeps it warm in winter. In the morning I said, ‘Good morning, zizzies, did you have a good sleep last night and pleasant dreams?’ And after they had breakfast they told me the story. Both told it zigzag but it was the same kind of zigzag each had together.”