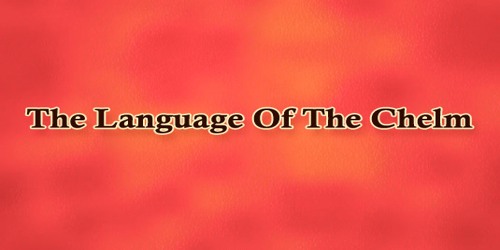 The Language Of The Chelm

Long ago in the village of Chelm, there lived the happiest people on Earth. The people of Chelm were happy because they were wise at least that is what they believed. In fact, they believed they were among the wisest people anywhere, and they didn’t care that other people sometimes called them fools.

People who invent a new language must be wise, don’t you think? And besides their many other skills, one summer day the people of Chelm did just that.

Every day the hot sun blazed down upon the little village, and never not once in many months did a drop of rain fall. The river grew muddy, then dry and dusty, and even the wells were running low. Gardens withered and animals panted with thirst. Children complained they could not swim, for there were no swimming holes left, and after a while, even the happy people of Chelm were confused. “I wonder where our rain has gone?” they asked.

After another month passed with no rain, the people of Chelm were genuinely worried.

“What will we do for water? We need water to live,” Moishe asked Sarah, and Sarah asked Rachel the same question, and Rachel asked Jacob, and Jacob asked Daniel, and Daniel asked Yitzhak, and Yitzhak asked Leah, and pretty soon all of the Chelmites were gathered in the village square, worrying about what to do for water.

“We’ll ask the wise men,” Rachel said, for she was wise enough to understand that this problem required the help of the wisest among them.

“Of course!” the others quickly agreed.

They set off for the village tavern, where their wise men often gathered to quench their thirst because, after all, wise people get thirsty too.

“Chaim,” the people said to the wisest of the wise men, “tell us what to do about water. How will we get water, which we need to sustain us?”

Chaim closed his eyes and rubbed his beard. This is what he did when he was thinking, so everyone grew quiet and waited patiently, for they understood that when Chaim was thinking, he needed time.

At long last Chaim opened his eyes and looked around at all the people gathered. “Let us take a walk,” he said, and everyone walked out of the tavern and into the village square, following Chaim. They walked through the square, past the synagogue, past the school and the park. Before long they were walking into the forest that lay just beyond the village.

When they were at the edge of the forest, Chaim began to stroke his beard. “Look around,” he said to the people. “What do you see?”

Everyone looked up, then down, then all around.

The others nodded their heads. “There are trees everywhere,” they agreed.

Chaim smiled. “We have many trees in our forest, don’t we?” he asked the people.

Everyone agreed. “Yes, we have many trees in our forest, Chaim.”

“And we have many kinds of trees, don’t we?” he asked.

“Yes, we have pine trees, and spruce and oak…”

“Wait,” Chaim interrupted, and he held up his hand. “I have come up with our solution.”

Everyone stood silent, waiting. The people of Chelm were respectful of their wise men. Besides, they were about to learn the solution to their terrible drought.

Everyone looked up and, sure enough, they were surrounded by it.

“What do you see everywhere around you?” Chaim asked them.

“Rain!” the people of Chelm shouted. “We are surrounded by rain!”

So once again the people of Chelm were happy, and better still, the next spring when the rain began to fall when it fell day in and out, and never stopped, and when their roofs were leaking, and the river was flooding the people celebrated their abundance of trees. They understand that they had invented a language that could bring them peace. How very wise of them!