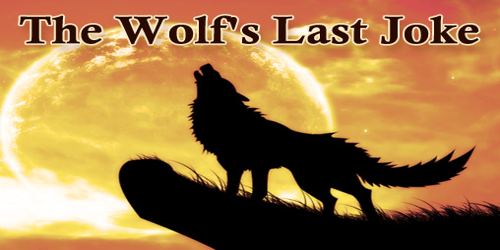 Once upon a time three animals a goat, a pig, and a horse -ran away from their cruel master and set off into the world. They were scrawny and starving, for their master had been cruel indeed. They hoped to find a better home.

As they were trudging along, they passed a wolf. He was, as wolves usually are, very hungry. “Well, well, my friends,” said the wolf, “have you come along to feed me?”

“Oh,” said the horse, “we’d be happy to let you eat us, but you see we’re just bags of bones. Why don’t you let us go into the hills and feast upon the grass? When we return, we’ll be nice and fat and much tastier.”

“That’s right,” said the pig, “and I could bring piglets. Imagine the feast you will have!”

The wolf thought this sounded like a fine plan and so he let them go on their way.

All that summer the wolf dreamed of fat horses and pudgy piglets. His mouth watered at the thought of the big, round goat. And as he dreamed, he saw visions of the creatures dancing in the clouds above him.

When autumn came, the wolf grew excited, and as autumn deepened and turned toward winter, he eagerly awaited the animals’ return. He smacked his lips when he saw the pig trotting down the hillside toward him. Behind her came six plump piglets.

The wolf skipped out from behind a bush and stopped in front of them. “Ah, you’ve kept your word and returned for my feast!”

“Of course I have,” said the pig. “I would never play a trick on you. But I’m afraid you’ll have to wait just one more day. My piglets have not yet been baptized. If you eat them in their present state, the poor things won’t go to heaven, and neither will you. Wait one more day for the priest to baptize them.”

Now the wolf couldn’t see why one day would make any difference, so he smiled and said, “Tomorrow, then?”

“Of course,” said the pig, “but wouldn’t you like to know their baptismal names? Bend over and I’ll whisper them to you.”

The wolf bent down, and when he did, the pig caught him by her teeth and shook him with all her might.

“Stop!” the wolf cried. “I was joking about eating you,” but the pig kept shaking him, and the piglets joined in until the wolf managed to escape.

He ran and ran, and had just stopped near a tree to catch his breath when he saw the fat goat trotting toward him.

“Welcome!” he cried. “I’m glad to see you’ve returned to be eaten. But don’t try any funny tricks.”

“Me? Play tricks?” the goat said sweetly. “I ate all summer long and all autumn too, and here I am an honest creature who has returned for your feast.”

“You are good and honest,” said the wolf, “so I shall eat you gently.”

“Good,” said the goat. “Throw back your head and open your mouth and I’ll jump down your throat.”

The wolf did just that, and the goat ran up and butted him so hard, he fell into a daze and rolled right down the hill. The goat followed, butting him again and again.

“I was joking about eating you!” the wolf cried. “I promise!” He hid behind a bush and held his head, for all that rolling had given him a terrible headache.

Now he heard the sound of horse’s hooves, so he ran from his hiding spot and cried, “Oh, am I happy to see you! But I hope you have no tricks in mind.”

“Not I,” said the horse. “I’m no trickster, but you’ll have to wait to eat me until after the wedding. I’m on my way there now. I must carry the bride.”

Hah, the wolf thought, for he imagined this must be another trick. “I’ll ride along with you,” he said, so the horse bent down and the wolf climbed upon his back, and off they galloped to the church.

Sure enough, there they saw a big church party, but when the people saw the wolf on the horse’s back, they shouted, “Oh no! The wolf is here!” They grabbed their canes and umbrellas and swords and ran toward him. “We’ll get you!” they cried.

“I was only joking about eating you,” the wolf whispered to the horse, and then he shouted, “People, I’m just a jokester,” but they kept running toward him, swinging their weapons.

He dashed for his life into the forest. Soon he saw a woodsman chopping down trees. When the woodsman saw the wolf charging toward him, he hid behind a tree, but the wolf was just as afraid, and so he hid, too, behind another tree.

They both stayed where they were for a long time, panting hard, and then the wolf said out loud, “Serves me right for being such a fool. I ought to be thwonked on the head.” When the woodsman heard that, he said, “If that’s what you want,” and lifted his ax.

“I’m joking!” the wolf cried, and off he ran again, muttering to himself. “No one understands a good joke these days, poor me.” And no one in those parts ever saw him again.