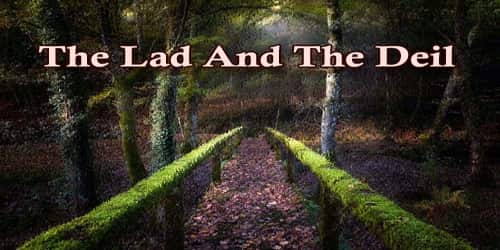 Once on a time, there was a lad who was walking along a road cracking nuts, so he found one that was worm-eaten, and just at that very moment, he met the Deil.

“Is it true, now,” said the lad, “what they say, that the Deil can make himself as small as he chooses, and thrust himself on through a pinhole?”

So the Deil did it.

Now, when he had crept well into it through the worm’s hole, the lad stopped it up with a pin.

“Now, I’ve got you safe,” he said and put the nut into his pocket.

So when he had walked on a bit, he came to a smithy and he turned in and asked the smith if he’d be good enough to crack that nut for him.

“Ay, that’ll be an easy job,” said the smith, and took his smallest hammer, laid the nut on the anvil, and gave it a blow, but it wouldn’t break.

So he took another hammer a little bigger, but that wasn’t heavy enough either.

Then he took one bigger still, but it was still the same story, and so the smith got wroth and grasped his great sled-hammer.

“Now, I’ll crack you two bits,” he said, and let drive at the nut with all his might and main. And so the nut flew to pieces with a bang that blew off half the roof of the smithy, and the whole house creaked and groaned as though it were ready to fall.

“Why! If I don’t think the Deil must have been in that nut,” said the smith.

“So he was; you’re right,” said the lad, as he went away laughing.