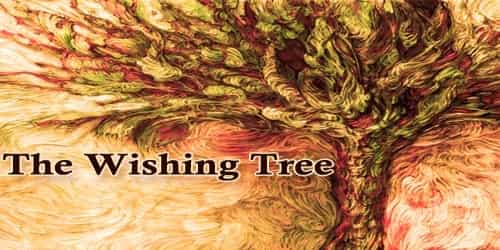 One day, a traveler was passing through a desert. After walking for a few miles, he felt tired, hungry and thirsty. “How I wish I could rest for a while under a tree!” he thought.

Suddenly, he saw a tree in front of him! He was surprised as he was in a desert, and just a few seconds ago there was no trace of even a bush. But, at the same time, he felt glad that he had a place to rest for a while. As the traveler sat under the tree, he thought, “How I wish I had water to drink!”

Just then he found a tumbler full of cold water kept on a stone in front of him. “Ah!” said the surprised traveler, and guzzled the water.

After a few minutes, the traveler thought, “How I wish I had something to eat!” In an instant, a variety of delicious food appeared before him. The traveler ate as much as he could.

All that food made him wish for a bed and he got one too! Stretching himself comfortably of the soft mattress, the traveler thought, “I wish I had someone to massage my feet.”

Instantly, a young woman appeared and started massaging his feet and legs. Tried as he was, the traveler soon fell fast asleep. Actually, he was under the shade of “Kalpa Vriksha”, a magical tree. Whoever was under it could have whatever he wished for!

After a long nap when the traveler woke up, he saw the woman still sitting beside his feet. Now the traveler began to think, “I am sure this is a magical part of the desert. Otherwise, how can things appear out of nowhere?” He wondered, “Could there be a demon around too?”

Suddenly, a demon appeared. The traveler was filled with fear! “A… A… Are you going to eat me up?” he asked the demon. “Yes! Get ready!” replied the demon, pouncing on the traveler. The frightened traveler took to his heels and ran away, thinking, “How I wish this demon disappears!”