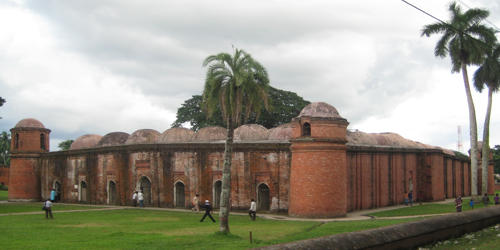 Visiting a Place of Historical Interest – The Shat Gambuj Mosque

Visiting a Place of Historical Interest – The Shat Gambuj Mosque

Travelling usually gives us delight. It also enriches our knowledge and broadens our outlook. When a visit is paid to a particularly important place with a view to gaining knowledge, it becomes more effective for learning.

The Shat Gambuj mosque (Sixty Dome Mosque) is one of the most important places in Bangladesh. It is one of the largest historical mosques of the Sultanate period. It is now a part of world heritage. It has been declared as the world heritage by UNESCO. The great Ulugh Khan Jahan established this mosque three miles west of the present Bagerhat town. Last March I had an opportunity to visit the place with my other three friends. Unfortunately, I couldn’t visit the forest due to time shortage. But I won’t miss the chance to visit Sixty Dome Mosque.

The mosque was built in the middle of the 15th century, a Muslim colony was founded in the mangrove forest of the Sundarbans, near the coast in the Bagerhat District by a saint-General, named Khan Jahan Ali. At first, we visited the major of Khan Jahan Ali. It stands on a raised ground. The tomb is made of cut-out stone. Nobody can say where these stones are brought from. People of this locality have a strong belief that these stones were brought from Chittagong by floating on water. It is true that these stones are not available in this area. On the tombs, there are inscriptions in Arabic.

There is a vast tank in front of the Mazar which looks like a lake. There are some crocodiles in the tank. People believe that if they appease the hunger of the crocodiles with hens, cocks, and goats, they will have the desire of their heart fulfilled. Whenever anybody makes such an offering, the caretaker of the Mazar calls out the crocodiles shouting, ‘Kala pahar, Dhala pahar, come!’ Within a few minutes, the crocodiles make their appearance and swallow the objects offered. We stayed there for nearly one hour and then left for Shat Gambuj mosque. This is about one and a half-mile away from the Mazar.

The mosque is famous for its sheer size and architectural beauty. The Shat Gambuj mosque stands on sixty stone-pillars with its seventy-seven gambuj or domes and not Shat or sixty gambuj as the name indicates. Some say that it was used by Khan Jahan All as a mosque. Others are of the opinion that it was used as a darbar by the then Mughal Governor of that place. But it is more associated with the name of Hazrat Khan Jahan Ali than with the name of the Governor. But it is undoubtedly a historical mosque. It is a big and beautiful building. The mosque is beautifully decorated. The mosque has great attraction for the tourists and visitors. Its architectural design has a special attraction for the tourists. The archaeological elegance of it enthralls the tourists even now.

There is a big dighi near the Satgambuj Mosque. This dighi is called the Ghora Dighi. The Ghoradigi is another tank that was built by the side of the Shat Gambuj. Its length is more than double its breadth. It is said that before digging the tank, a horse was made to run. Covering a certain distance, the horse stood still. That distance was accepted as the length of the tank or dighi. This dighi has also some crocodiles.

We spent some hours visiting historical place. We could learn many things about Khan Jahan Ali and the historical importance of this area.

Khan Jahan Ali was a great preacher of Islam. He tried his best to make the area of Bagerhat a habitable land. He built mosques, dug tanks, and made roads. He could amass vast wealth for his own luxury but he did not do so. He was a monarch without a crown. He loved the people. I left Bagerhat but the memory still haunts my mind. I came to know about the glorious history of our past and returned with a sense of satisfaction.