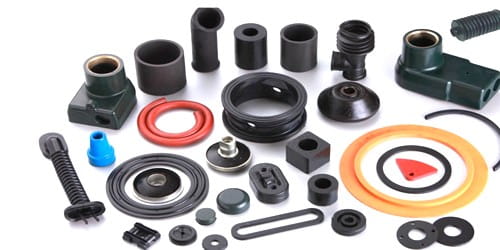 The Uses of Rubber

The Uses of Rubber

The uses of rubber vary from household items to industrial products. In 1887, rubber seeds that grow naturally in Brazil and South America were shipped to England by a man called Wickham. Two months later, tiny rubber plants grown from these seeds in London’s famous Kew Gardens, were dispatched to Sri Lanka and Singapore. There, the plants flourished and so not only was wealth and prosperity brought to Malaysia, for the production of rubber is now Malaysia’s greatest industry; but also the world’s rubber manufacturers are able to cope with the phenomenal demands for rubber in practically every department of life.

Today, rubber is indeed man’s versatile servant. It serves you in your home.  It is found on your radio and television, on telephones, electric irons, toasters, coffee percolators, and sewing machines. It is found in the kitchen for the vacuum cleaner and refrigerator. Where is the house without its electric fan containing rubber or the desk that does not show an eraser, elastic band or vulcanized fountain pen? There are mattresses made of foam rubber and in colder climates, where is the house without its rubber hot water bottle? In the garden, rubber has a variety of uses from hose-pipes to footwear. Because of the high cost of certification for aircraft use of synthetic rubber, many aircraft tires and inner tubes are still made of natural rubber.

Rubber is used to make our raincoats or mackintoshed as they are called after a Manchester firm ‘Machintosh’ who, in 1846, bought a patent for vulcanizing rubber, invented by a man called ‘Parkes’ in Birmingham. Since Christopher Columbus first saw natives of Haiti playing games with balls made from the gum of rubber tree, thousands of different balls from the rubber, beach ball to the golf ball, have been made out.

Nowadays, with the increasing number of cars, pneumatic tires take 90% of the world’s rubber. Rubber bearing springs and rubber sealing systems in rake mechanisms of airplanes, ships and cars add considerably to our comfort. The two most noticeable industries that use a significant tonnage of rubber are the paper and carpet industries. Used rubber tires are often recycled to make other items like mulch, shoes, bags, jewelry, and coats. It is safe and reliable and seen as valuable material by many.

The largest consumer of rubber is tires and tubes. Rubber is there when illness lands us in hospital. Because it absorbs shock, it is used for soundproof flooring, tyres on wheelchairs and rubber rollers on beds and trolleys. Gloves and toy balloons are also large consumers of rubbers, however, the type of rubber used is concentrated latex.