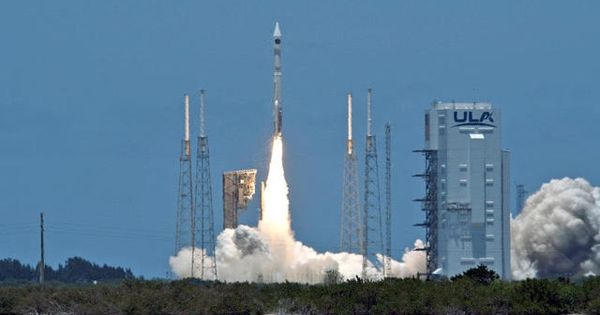 A United Launch Alliance Atlas 5 rocket launched from Cape Canaveral, launching a billion-dollar missile early warning satellite into orbit to scan the Earth below for the tell-tale heat generated by a threatening rocket launch.

The new satellite will join four other Space Based Infrared System — SBIRS — spacecraft already in orbit 22,300 miles above the equator, which use telescopes and cutting-edge infrared sensors to provide early warning of unusual heat “signatures.”

The 197-foot rocket lifted off from the Space Force’s launch pad in Cape Canaveral, Florida, on Tuesday. It’s yet another sign that, despite being the youngest service branch in the US Armed Forces, the Space Force is playing an increasingly prominent role within the American military complex.

“There has never been a greater need for SBIRS systems,” said Tom McCormick, vice president of Lockheed Martin’s Overhead Persistent Infrared Missions division. “As the threat of ballistic missile technology spreads around the world, adversaries who we once held at a geographical distance now boast about their development of this technology.”

“SBIRS infrared detection capabilities serve as a tip of the spear, or bell ringer, that a launch has occurred and something is on the way. Many of our country’s other defensive systems rely on SBIRS data to form a protective missile kill chain to protect our nation and armed forces.”

The 197-foot-tall rocket, weighing 950,000 pounds at liftoff, climbed majestically away from pad 41 at the Cape Canaveral Space Force Station, tipping over and arcing east over the Atlantic Ocean through a cloudless blue sky.

The satellite on board the rocket is an upgraded version of one of the service’s existing satellites that comprise the Space-Based Infrared System (SBIRS), a space surveillance network designed to provide early missile warnings.

The system works by detecting the infrared heat signatures of soaring missiles and tracking them to provide advance warning to forces on the ground.

According to Tom McCormick, vice president of Lockheed Martin’s Overhead Persistent Infrared Missions division, “the need for SBIRS systems has never been more critical.” “As the threat of ballistic missile technology spreads around the world, adversaries who we once held at a geographical distance now boast about their development of this technology.”

“The world is a more dangerous place now, with over 1,000 ballistic missile launches globally every year,” McCormick said in an official statement. The SBIRS, according to McCormick, is the “tip of the spear, or bell ringer, that a launch has occurred and something is coming.”

According to SpaceFlight Now, there are currently four other SBIRS Geo satellites circling the equator, as well as at least two additional infrared instruments onboard spy satellites operated by the National Reconnaissance Office that are in elliptical orbits over the poles.

The missile warning constellation, which includes both the Defense Support Program and the SBIRS satellites, provides the first warning to our country’s leaders. So, whether there is a true launch or a false indication of a launch, the missile warning architecture is there to provide the true data that allows us to understand what happened.