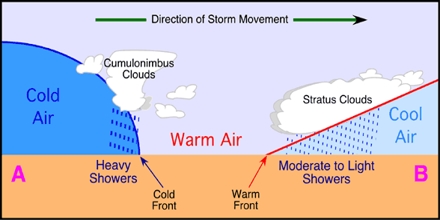 Understanding Fronts: Frontal Movements and Cyclones. Front is a narrow transition zone, or boundary, between disparate synoptic scale air masses whose primary discontinuity is density. It is synoptic scale along the length of the front but mesoscale across the front itself. An air mass is a defined as a large body of air with very similar characteristics. An air mass is most easily identified by comparing it to other air masses. It can be modified with time, most notably by days of sunshine or lack thereof.