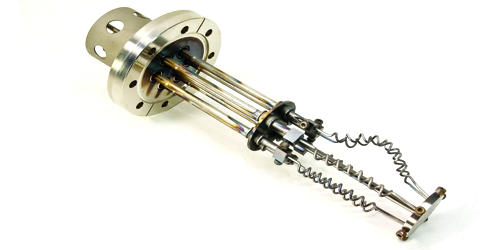 The titanium sublimation pump (TSP) is used in conjunction with an ion pump to improve pumping efficiency. It is a type of vacuum pump used to remove residual gas in ultra-high vacuum systems, maintaining the vacuum.  It works by evaporating a titanium film onto the cryo panel or TSP shield. They are often used in combination with ion pumps or independently to remove reactive gases from the vacuum environment. In a TSP, filaments of titanium alloy are heated electrically until the titanium sublimates from the surface of the filaments into the vacuum.

Titanium Sublimation Pumps (TSP) are often used in combination with ion getter pumps because they have a particularly high pumping speed for some gases. Its construction and principle of operation are simple. It consists of a titanium filament through which a high current (typically around 40 Amps) is passed periodically. Combined with an Ion pump, the TSP allows for low ultimate pressure in a shorter amount of time. This current causes the filament to reach the sublimation temperature of titanium, and hence the surrounding chamber walls become coated with a thin film of clean titanium. The sublimed titanium precipitates on the surrounding surfaces and forms a thin layer.

Since clean titanium is very reactive, components of the residual gas in the chamber which collide with the chamber wall are likely to react and to form a stable, solid product. With the increasing coverage of these gases, the pumping speed decreases again. Thus the gas pressure in the chamber is reduced. But after some time, the titanium film will no longer be clean and hence the effectiveness of the pump is reduced. By cooling the surfaces with water or liquid nitrogen, the pumping speed can be further increased considerably.

Since the TSP filament has a finite lifetime, TSPs commonly have multiple filaments to allow the operator to switch to a new one without needing to open the chamber.  A high current, from an external power supply, is passed through the filament so that it glows red hot. Replacing used filaments can then be combined with other maintenance jobs. The effectiveness of the TSP depends on a number of factors. Amongst the most critical are; the area of the titanium film, the temperature of the chamber walls, and the composition of the residual gas. At this temperature, titanium is sublimated directly from the filament. The area is typically maximized when considering where to mount the TSP. Titan sublimation pumps are particularly suitable for gases such as H2O, CO, CO2, and O2.