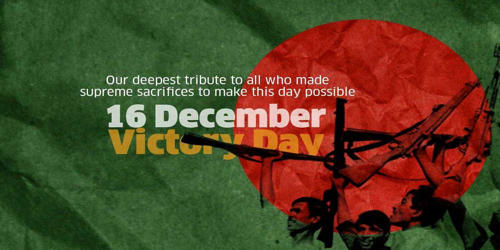 The Victory Day of Bangladesh

The Victory Day of Bangladesh

The history of the day: In 1947, India was partitioned by the British, creating the ‘Dominion of Pakistan’, which was two separate regions to the northwest and northeast of India. The new dominion was governed by West Pakistan, which led to friction between the two regions.

We had been under Pakistani rule from 1947 to 1971. Bangladesh was named East Pakistan. From the victory, the Pakistani rulers were ruling our country with an iron rod. They were depriving us of our rights. In the 1970 general elections, the Bangla-based Awami League won an overall majority, but the West Pakistani regime was reluctant to hand overpower. They were looting our money and sending it to West Pakistan. They were establishing industries in West Pakistan. So, people of the east part were becoming jobless. Not only that, but the rulers were also growing more brutal too. They were torturing those who were raising their voice against their injustice. Even, the once tried to impose Urdu upon us. On 25 March 1971, Pakistani troops were used to quell the growing unrest. This marked the start of the War of Independence, also known as the War of Liberation.

Bangabandhu Sheikh Mujibur Rahman was forced no to form a government through his party won absolute majority int the general election. Rather, he was taken the prisoner on the 25th of March 1971. Pakistani rulers killed thousands of people. They fired villages after villages. Finding no other way, Bangladesh Sheikh Mujibur Rahman declared independence on the 26th March. Then the Liberation War began. In November 1971, India entered the war, supporting East Pakistan. This led to victory for East Pakistan on 16 December 1971 with the Pakistan army’s surrender to the Mukti Bahini at the Race Course Maidan (now Suhrawardy Udyan) in Dhaka. We become independent through a bloody war after nine months.

Celebration of the day: Commemorations to mark the day begins with a 31 gun salute at the National Parade Ground at Sher-e-Bangla Nagar. The President Prime Minister will pay tribute to the martyrs of the Liberation War by placing wreaths at the National Mausoleum at Savar at sunrise.

The national flag will be flown from government, semi-government and private offices across the country. Important buildings and establishments will be lit up at night. Important roads will be decorated with miniature national flags and bunting. The state-owned and private televisions and radios air month-long special programs highlighting the Liberation War.

Special prayers will be offered in mosques and other places of worship, seeking the salvation of the souls of martyrs of the Liberation War and peace, progress and prosperity of the country.

Importance: the day has great importance in our national life. We have earned name and fame for this day. Now we are the citizens of a free country. We are enjoying equal rights. We do everything freely. We are living with respect. We don’t need to bow down our heads before any force. The whole world knows our country now. The day is a great inspiration. It encourages us to go ahead.