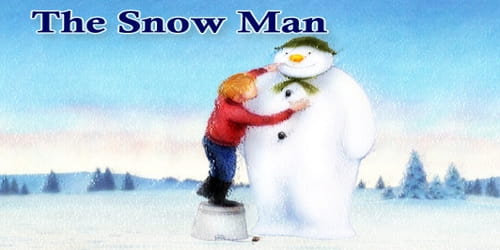 “It is so delightfully cold,” said the Snow Man, “that it makes my whole body crackle. This is just the kind of wind to blow life into one. How that great red thing up there is staring at me!” He meant the sun, who was just setting. “It shall not make me wink. I shall manage to keep the pieces.”

He had two triangular pieces of tile in his head, instead of eyes; his mouth was made of an old broken rake, and was, of course, furnished with teeth. He had been brought into existence amidst the joyous shouts of boys, the jingling of sleigh-bells, and the slashing of whips. The sun went down, and the full moon rose, large, round, and clear, shining in the deep blue.

“There it comes again, from the other side,” said the Snow Man, who supposed the sun was showing himself once more. “Ah, I have cured him of staring, though; now he may hang up there, and shine, that I may see myself. If I only knew how to manage to move away from this place, I should so like to move. If I could, I would slide along yonder on the ice, as I have seen the boys do; but I don’t understand how; I don’t even know how to run.”

“Away, away,” barked the old yard-dog. He was quite hoarse, and could not pronounce “Bow-wow” properly. He had once been an indoor dog, and lay by the fire, and he had been hoarse ever since. “The sun will make you run someday. I saw him, last winter; make your predecessor run and his predecessor before him. Away, away, they all have to go.”

“I don’t understand you, comrade,” said the Snow Man. “Is that thing up yonder to teach me to run? I saw it running itself a little while ago, and now it has come creeping up from the other side.”

“You know nothing at all,” replied the yard-dog; “but then, you’ve only lately been patched up. What you see yonder is the moon, and the one before it was the sun. It will come again to-morrow, and most likely teach you to run down into the ditch by the well; for I think the weather is going to change. I can feel such pricks and stabs in my left leg; I am sure there is going to be a change.”

“I don’t understand him,” said the Snow Man to himself; “but I have a feeling that he is talking of something very disagreeable. The one who stared so just now, and whom he calls the sun, is not my friend; I can feel that too.”

“Away, away,” barked the yard-dog, and then he turned round three times, and crept into his kennel to sleep.

There was really a change in the weather. Towards morning, a thick fog covered the whole country round, and a keen wind arose so that the cold seemed to freeze one’s bones; but when the sun rose, the sight was splendid. Trees and bushes were covered with hoar frost and looked like a forest of white coral; while on every twig glittered frozen dew-drops. The many delicate forms concealed in summer by luxuriant foliage were now clearly defined and looked like glittering lace-work.

From every twig glistened a white radiance. The birch, waving in the wind, looked full of life, like trees in summer; and its appearance was wondrously beautiful. And where the sun shone, how everything glittered and sparkled, as if diamond dust had been strewn about; while the snowy carpet of the earth appeared as if covered with diamonds, from which countless lights gleamed, whiter than even the snow itself.

“This is really beautiful,” said a young girl, who had come into the garden with a young man; and they both stood still near the Snow Man, and contemplated the glittering scene. “Summer cannot show a more beautiful sight,” she exclaimed, while her eyes sparkled.

“And we can’t have such a fellow as this in the summertime,” replied the young man, pointing to the Snow Man; “he is capital.”

The girl laughed, and nodded at the Snow Man, and then tripped away over the snow with her friend. The snow creaked and crackled beneath her feet as if she had been treading on starch.

“Who are these two?” asked the Snow Man of the yard-dog. “You have been here longer than I have; do you know them?”

“Of course I know them,” replied the yard-dog; “she has stroked my back many times, and he has given me a bone of meat. I never bite those two.”

“But what are they?” asked the Snow Man.

“They are lovers,” he replied; “they will go and live in the same kennel by-and-by, and gnaw at the same bone. Away, away!”

“Are they the same kind of beings as you and I?” asked the Snow Man.

“Well, they belong to the same master,” retorted the yard-dog. “Certainly people who were only born yesterday know very little. I can see that in you. I have age and experience. I know everyone here in the house, and I know there was once a time when I did not lie out here in the cold, fastened to a chain. Away, away!”

“The cold is delightful,” said the Snow Man; “but do tell me to tell me; only you must not clank your chain so; for it jars all through me when you do that.”

“Away, away!” barked the yard-dog; “I’ll tell you; they said I was a pretty little fellow once; then I used to lie in a velvet-covered chair, up at the master’s house, and sit in the mistress’s lap. They used to kiss my nose, and wipe my paws with an embroidered handkerchief, and I was called ‘Ami, dear Ami, and sweet Ami.’ But after a while, I grew too big for them, and they sent me away to the housekeeper’s room; so I came to live on the lower story. You can look into the room from where you stand, and see where I was master once; for I was indeed master to the housekeeper. It was certainly a smaller room than those upstairs, but I was more comfortable; for I was not being continually taken hold of and pulled about by the children as I had been. I received quite as good food, or even better. I had my own cushion, and there was a stove- it is the finest thing in the world at this season of the year. I used to go under the stove, and lie down quite beneath it. Ah, I still dream of that stove. Away, away!”

“Does a stove look beautiful?” asked the Snow Man “is it at all like me?”

“It is just the reverse of you,” said the dog; “it’s as black as a crow, and has a long neck and a brass knob; it eats firewood, so that fire spurts out of its mouth. We should keep on one side, or under it, to be comfortable. You can see it through the window, from where you stand.”

Then the Snow Man looked and saw a bright polished thing with a brazen knob, and fire gleaming from the lower part of it. The Snow Man felt quite a strange sensation come over him; it was very odd, he knew not what it meant, and he could not account for it. But there are people who are not men of snow, who understand what it is. “And why did you leave her?” asked the Snow Man, for it seemed to him that the stove must be of the female sex. “How could you give up such a comfortable place?”

“I was obliged,” replied the yard-dog. “They turned me out of doors and chained me up here. I had bitten the youngest of my master’s sons in the leg; because he kicked away the bone I was gnawing. ‘Bone for bone,’ I thought; but they were so angry, and from that time I have been fastened with a chain and lost my bone. Don’t you hear how hoarse I am? Away, away! I can’t talk anymore like other dogs. Away, away, that is the end of it all.”

But the Snow Man was no longer listening. He was looking into the housekeeper’s room on the lower story; where the stove stood on its four iron legs, looking about the same size as the Snow Man himself. “What a strange crackling I feel within me,” he said. “Shall I ever get in there? It is an innocent wish, and innocent wishes are sure to be fulfilled. I must go in there and lean against her, even if I have to break the window.”

“You must never go in there,” said the yard-dog, “for if you approach the stove, you’ll melt away, away.”

During the whole day the Snow Man stood looking in through the window, and in the twilight hour the room became still more inviting, for from the stove came a gentle glow, not like the sun or the moon; no, only the bright light which gleams from a stove when it has been well fed. When the door of the stove was opened, the flames darted out of its mouth; this is customary with all stoves. The light of the flames fell directly on the face and breast of the Snow Man with a ruddy gleam. “I can endure it no longer,” said he; “how beautiful it looks when it stretches out its tongue?”

The night was long but did not appear so to the Snow Man, who stood there enjoying his own reflections and crackling with the cold. In the morning, the window-panes of the housekeeper’s room were covered with ice. They were the most beautiful ice-flowers any Snow Man could desire, but they concealed the stove. These window-panes would not thaw, and he could see nothing of the stove, which he pictured to himself as if it had been a lovely human being. The snow crackled and the wind whistled around him; it was just the kind of frosty weather a Snow Man might thoroughly enjoy. But he did not enjoy it; how, indeed, could he enjoy anything when he was “stove sick?”

“That is a terrible disease for a Snow Man,” said the yard-dog; “I have suffered from it myself, but I got over it. Away, away,” he barked and then he added, “the weather is going to chang” And the weather did change; it began to thaw. As the warmth increased, the Snow Man decreased. He said nothing and made no complaint, which is a sure sign. One morning he broke, and sunk down altogether; and, behold, where he had stood, something like a broomstick remained to stick up in the ground. It was the pole round which the boys had built him up. “Ah, now I understand why he had such a great longing for the stove,” said the yard-dog. “Why, there’s the shovel that is used for cleaning out the stove, fastened to the pole.” The Snow Man had a stove scraper in his body; that was what moved him so. “But it’s all over now. Away, away.” And soon the winter passed. “Away, away,” barked the hoarse yard-dog. But the girls in the house sang,

The months are bringing the sweet spring-time,

When the lark in the sky sings joyfully.

And I’ll mock his note in my wanderings.”

And nobody thought any more of the Snow Man.