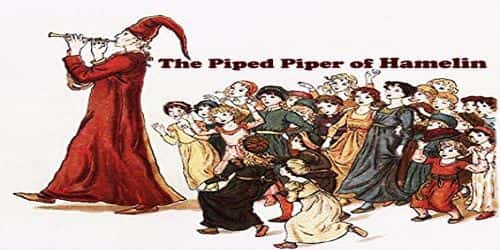 The Piped Piper of Hamelin

Once, the town named ‘Hamelin’ was infested with rats. The people were in much danger as there were rats everywhere. The city dwellers became very intolerant of rats. Rats damaged their crops, clothes, things for domestic use and what not. They chirped and ran to and fro in their houses without the least fear of the cats. Rather they chased the cats and the latter fled away. They talked and talked, but found no way out. At last, they decided to go to the Mayor to seek his help. They came to the Town Hall and said to the Mayor, “Do something about the rats or we will send you packing.” The Mayor trembled. He called a meeting of his councilors and discussed the problem for hours, but they could not find any solution. They were in despair.

At that moment a tall thin stranger entered the Hall. His dress was made of pieces of cloth of different colors. He went up to the council tables and said, “People call me the Pied Piper. If you pay me a thousand guilders, I will rid your town of rats.” The Mayor and his councilors got surprised seeing such a stranger. The Mayor said, “I will pay you a thousand guilders, but after you have removed all the rats from my town.” The Pied Piper agreed. He went out of the council room and started playing on a strange flute. Hearing the flute, all the rats, big and small, started following the Pied Piper. The Pied Piper was going towards the river playing on the flute. When he reached the bank of the river Weser, all the rats started jumping into the river. Thus all the rats were removed from the town. Then the Pied Piper demanded his guilders from the Mayor. But the Mayor refused to give him one thousand guilders.

The Pied Piper again started playing on another strange flute. Hearing the flute, the children, big and small, started following him like the rats. The piper took them to the mountains and disappeared with the children. Thus the town lost all the children.