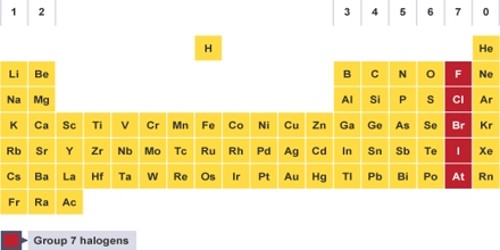 The halogens are chemical elements under the second-to-right column in the periodic table, also known as Group 17. The elements in the group are fluorine, chlorine, bromine, iodine, astatine, and ununseptium. Halogen literally means “salt becomer”, but it is often cited to mean “salt producer”. They all are non-metals. They react with metals to form compounds called salts. For example: ​2Na + Cl2 →  2NaCl (s). The halogens exist, at room temperature, in all three states of matter: Solid- Iodine, Astatine; Liquid- Bromine; Gas- Fluorine, Chlorine. 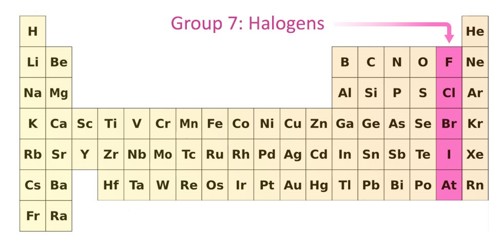 They are very reactive, so they are likely to join with other elements on the left side of the periodic table to make compounds. This is due to the fact that they are missing one electron. Because the halogen elements have seven valence electrons, they only require one additional electron to form a full octet. They are rarely found alone in nature, except astatine, which is not found in nature. They exist as simple molecules. Each molecule contains two halogen atoms joined by a single covalent bond.

Fluorine is the most reactive, while iodine is the least reactive, and it has certain other properties that set it apart from the other halogens. Astatine is very radioactive and hard to get. Iodine is most familiar as an antiseptic, and bromine is used chiefly to prepare bromine compounds that are used in flame retardants and as general pesticides. Chlorine, bromine, and iodine have valence shell d orbitals and can expand their valence shells to hold as many as 14 valence electrons. The chemistry of the halogens is dominated by oxidation-reduction reactions. The melting points and boiling points of the halogens increase going down group 7. This characteristic makes them more reactive than other non-metal groups. They share similar chemical properties.