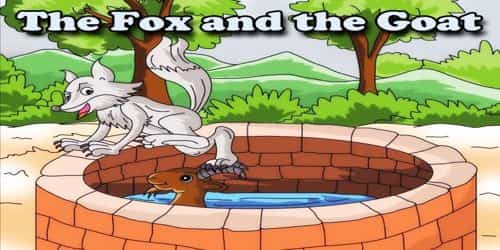 The Fox and The Goat

Once a fox became very thirsty. He went here and there in search of water. At last, he found a well in the distance. Going near, he leaped in and drank his fill. Now after his thirst was quenched, he tried to get out of the well. He was in despair. At this time, a goat appeared there. The goat was thirsty. He asked the fox how the water of the well tested.

The fox said, “My friend, the water of the well is very sweet to taste. It is so sweet that though I have satisfied my thirst, I wish to drink more. Come down, my dear friend, and drink to your heart’s content.”

The foolish goat believed it. So he jumped down into the well. As soon as the goat was there, the sly fox jumped upon his head and then without much difficulty, he got out of the well and went away.

While walking away the fox said, “If you had as much sense as your beard you would have been more cautious about jumping in without making sure that you could get out again”. The foolish goat remained in the well. He now understood why the fox invited him to jump down into the well.

Moral of the story: ‘Look before you leap.’