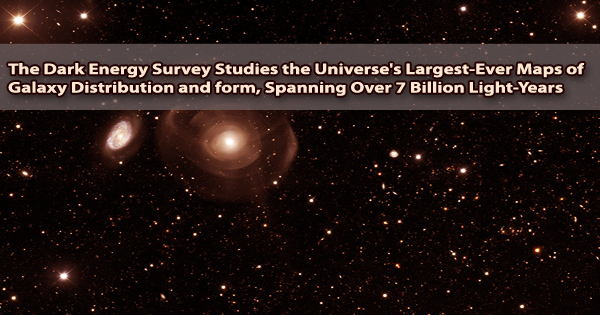 The Dark Energy Survey investigates the largest-ever maps of galaxy distribution and morphologies, spanning more than 7 billion light-years throughout the Universe, in 29 new scholarly articles. The extremely detailed study, which uses data from the first three years of the survey, adds to the most powerful test of the current best model of the Universe, the standard cosmological model.

Earlier DES findings and other studies, however, suggest that matter in the Universe today is a few percent less clumpy than expected. The Dark Energy Survey (DES) has produced the most exact measurements of the Universe’s composition and development to date, using the largest-ever sample of galaxies seen spanning almost one-eighth of the sky.

The 570-megapixel Dark Energy Camera atop the National Science Foundation’s Vctor M. Blanco 4-meter Telescope at Cerro Tololo Inter-American Observatory (CTIO) in Chile, a program of the NSF’s NOIRLab, captures photos of the night sky. The Dark Energy Camera, one of the world’s most powerful digital cameras, was created particularly for DES. The Department of Energy (DOE) sponsored it, and it was built and tested at Fermilab.

From 2013 to 2019, DES spent 30% of its time on the Blanco Telescope, surveying 5000 square degrees, or about one-eighth of the total sky, during the period of 758 nights of observation, documenting hundreds of millions of objects. The results released today use data from 226 million galaxies spotted over 345 nights during the first three years to generate the biggest and most exact maps of the distribution of galaxies in the Universe at recent epochs ever created. The National Center for Supercomputing Applications at the University of Illinois in Urbana-Champaign handled the DES data.

“NOIRLab is a proud host for and member of the DES collaboration,” said Steve Heathcote, CTIO Associate Director. “The Dark Energy Camera was a popular option for community and Chilean astronomers both during and after the study.”

The Dark Energy Camera is now being utilized for initiatives that cover a wide variety of research, including cosmology. The Community Scientific and Data Center (CSDC), a program of the National Science Foundation’s NOIRLab, curates the Dark Energy Camera science repository, which includes DES Data Release 2 on which these results are based. CSDC connects and supports the scientific goals of NOIRLab’s telescopes, notably the Blanco telescope at CTIO, by providing software platforms, user services, and development projects.

Because DES looked at both local galaxies and galaxies billions of light-years distant, its maps give a picture of the Universe’s current large-scale structure as well as a glimpse of how that structure has developed over the last 7 billion years.

Ordinary matter only makes up around 5% of the Universe. Dark energy, which cosmologists believe is responsible for the Universe’s rapid expansion by counteracting gravity, accounts for around 70% of the total. The remaining 25% is dark matter, which holds galaxies together with its gravitational pull. Dark matter and dark energy are both impenetrable. DES aims to provide light on their nature by examining how their rivalry impacts the Universe’s large-scale structure across cosmic time.

DES relies primarily on two phenomena to estimate the dispersion of dark matter and the influence of dark energy. First, galaxies are not randomly scattered throughout space on vast scales, but rather form a weblike structure due to the gravity of dark matter. DES tracked the evolution of this cosmic network throughout the universe’s history. The cosmic web’s grouping of galaxies indicated places with a higher quantity of dark matter.

Second, DES used weak gravitational lensing to identify the signature of dark matter. The gravity of both ordinary and dark matter in the foreground may bend the path of light from a distant galaxy as it travels through space, resulting in a distorted picture of the galaxy as viewed from Earth. DES scientists were able to deduce the clumpiness of dark matter in the Universe by examining how the apparent forms of distant galaxies are aligned with each other and with the locations of nearer galaxies along the line of sight.

DES scientists matched their findings to data from the European Space Agency’s orbiting Planck observatory to evaluate cosmologists’ current model of the Universe. Planck looked back to the early Universe, only 400,000 years after the Big Bang, using light known as the cosmic microwave background. The Planck measurements provide a detailed picture of the Universe 13 billion years ago, and the conventional cosmological model predicts how dark matter should evolve to the present day.

When combined with previous findings, The results of DES are consistent with the predictions of the standard model of cosmology, making it the most powerful test of the current best model of the Universe to date. DES and numerous earlier galaxy studies, however, suggest that the Universe now is a few percent less clumpy than expected.

The Dark Energy Camera photographed ten areas of the sky repeatedly during the survey as “deep fields.” The astronomers were able to see more distant galaxies by stacking those pictures together. The researchers then calibrated the rest of the survey region using the redshift data from the deep fields. The team was able to nail down the density and clumpiness of the Universe with remarkable accuracy thanks to these and other advances in measurements and modeling, as well as a threefold increase in data compared to the first year.

DES’s night sky observations came to an end in 2019. The team is now equipped to handle the entire dataset, thanks to the expertise acquired from studying the first half of the data. The final DES study is intended to provide a more detailed picture of the Universe’s dark matter and dark energy. Over 400 scientists from 25 universities in seven countries make up the DES cooperation.

“The collaboration is remarkably young. It’s tilted strongly in the direction of postdocs and graduate students who are doing a huge amount of this work,” said DES Director and spokesperson Rich Kron, who is a Fermilab and University of Chicago scientist. “That’s really satisfying. The Dark Energy Survey is being used to teach a new generation of cosmologists.”

Future sky surveys, such as the Rubin Observatory Legacy Survey of Space and Time, will be able to use the technologies established by the team. “DES shows that the era of big survey data has well and truly begun,” notes Chris Davis, NSF’s Program Director for NOIRLab. “DES on the Blanco telescope of the National Science Foundation has set the stage for Rubin Observatory’s spectacular findings in the following decade.”