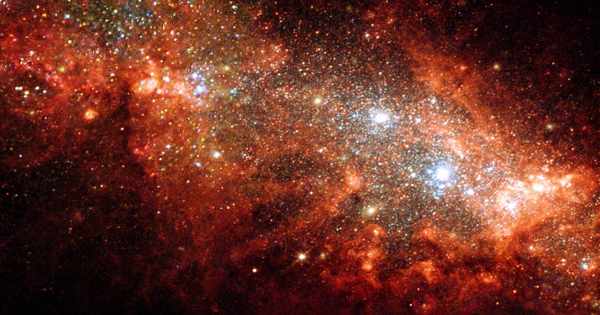 Metallicity is an astronomical term. It refers to the number of elements heavier than hydrogen and helium. Metallicity and SFR, along with available gas supplies, are properties that are inextricably linked. As previously stated, the majority of heavy elements are produced in short-lived massive stars and released after their terminal explosion.

The majority of normal physical matter in the Universe is made up of hydrogen or helium. Astronomers use the term “metals” to refer to “all elements except hydrogen and helium.” This differs from the conventional chemical or physical definition of metal as an electrically conducting solid.

Stars and nebulae with a high concentration of heavier elements are referred to as “metal-rich,” despite the fact that many of those elements are non-metals in chemistry. Intense stellar winds and terminal explosions from massive stars transferred energy and heavy elements to interstellar gas, which later collapsed to produce a new generation of stars, and the cycle repeated, but with heavier elements in the gas.

The heavier elements are the result of stellar nucleosynthesis. The majority of elements heavier than hydrogen and helium (“metals”) in the Universe are formed in the cores of stars. Metals are released into the surrounding environment by stellar winds and supernovae over time, enriching the interstellar medium. There is material for the formation of new stars there. Stars from older generations formed in the metal-poor early Universe have lower metallicities than stars from younger generations formed in a more metal-rich Universe.

Observed changes in the chemical abundances of different types of stars, based on spectral peculiarities later attributed to metallicity, prompted astronomer Walter Baade to propose the existence of two distinct populations of stars in 1944. These were dubbed Population I (metal-rich) and Population II (metal-poor) stars. Population III stars were introduced as a third stellar population in 1978. These extremely metal-poor stars were theorized to be the Universe’s “first-born” stars.

The study of the age dependence of the metallicity of stars in the galactic disk is an important application of galactic clusters. There are several elements for which absolute ages, rather than statistical ages, are especially important. Lithium is one such element. Lithium is well known to be destroyed by nuclear processing in solar-type stars. Convection transports the element into the core, where it is completely consumed by proton nuclear processes. As a result, it is both a useful constraint on the rate of mixing in stellar envelopes and a valuable potential age discriminator in field stars.