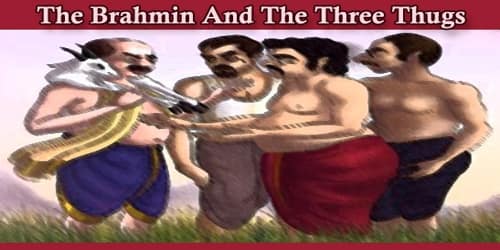 The Brahmin And The Three Thugs

Long, long ago, there lived a Brahmin in a small village. His name was Mitra Sharma. Once his father told him to sacrifice a goat according to some ancient Hindu rites. He asked him to visit the cattle fair in a nearby village and purchase a healthy goat for that purpose.

The Brahmin visited the cattle fair and bought a healthy and fat goat. He slung the goat over his shoulder and headed back for his home.

There were three thugs also roaming in the fair, with the sole intention of cheating the shopkeepers and other customers there. When they saw the Brahmin going back to his home with the goat, they thought of a plan to get the goat by employing the methods of thuggery.

“This goat will make a delicious meal for all of us. Let’s somehow get it.” The three thugs discussed the matter amongst themselves. Then they separated from one another and took hiding positions at three different places on the path of the Brahmin.

As soon as the Brahmin reached a lonely spot, one of the thugs came out of his hiding place and said to the Brahmin in a surprised tone, “Sir, what’s this? I don’t understand why a pious man like you should carry a dog on his shoulders!”

The Brahmin was shocked to hear these words. He shouted back, “Can’t you see? It’s not a dog but a goat, you fool.”

“I beg for your apology, sir. I told you what I saw. I am sorry if you don’t believe it,” said the thug and went away.

The Brahmin had hardly walked a hundred yards when another thug came out of his hiding place and said to the Brahmin, “Sir, why do you carry a dead calf on your shoulders? You seem to be a wise person. Such an act is sheer foolishness on your part.”

“What!” the Brahmin shouted. “How do you mistake a living goat for a dead calf?”

“Sir,” the second thug replied, “you seem to be highly mistaken in this respect yourself. Either you come from such a country where goats are not found, or you do it knowingly. I just told you what I saw. Thank you.” The second thug went away laughing.

The Brahmin walked further. But again, he had hardly covered a little distance when the third thug confronted him laughing.

“Sir, why do you carry a donkey on your shoulders? It makes you a laughingstock”, said the thug and began to laugh again.

The Brahmin hearing the words of the third thug became highly worried. “Is it really not a goat!” He began to think. “Is it some kind of ghost!”

The Brahmin got frightened. He thought to himself that the animal he was carrying on his shoulders might certainly be some sort of a ghost, because; it transformed itself from a goat into a dog, from a dog into a dead calf and from the dead calf into a donkey.

The Brahmin was then terrified to such an extent that he flung the goat on to the roadside and fled.

The thugs caught the goat and feasted on it happily.