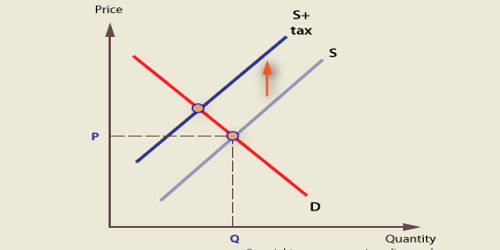 The tax shift is the passing of the tax burden from one economic agent to another. It is a change in taxation that eliminates or reduces one or several taxes and establishes or increases others while keeping the overall revenue the same. The term can refer to desired shifts, such as towards Pigovian taxes (typically sin taxes and ecotaxes) as well as (perceived or real) undesired shifts, such as a shift from multi-state corporations to small businesses and families. For example, the burden of a sales tax that is formally levied on a firm may be passed on to consumers in the form of higher prices.

Tax shift is a kind of economic phenomenon in which the taxpayer transfers the tax burden to the purchaser or supplier by increasing the sales price or depressing the purchase price during the process of commodity exchange.

The tax shift is an objective process of economic movement. It does not include any emotional factors. Whether taxpayers take the initiative to raise or lower prices or passively accept price fluctuations is not related to tax shift. Whether the economic relationship between the taxpayer and the tax bearer is a class opposition or the unity opposition, it is also unrelated to the tax shift.

It has the following three characteristics:

(1) It is closely linked with the price increase and decrease;

(3) It is the taxpayer’s proactive behavior.