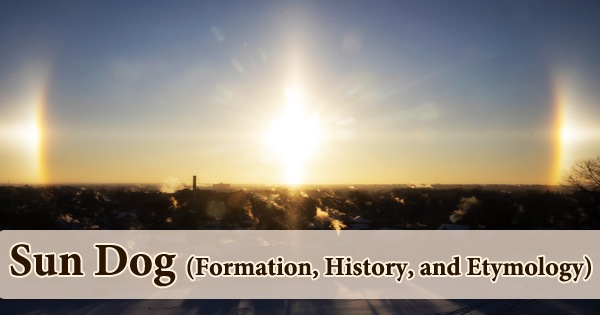 A sun dog (or sundog) or mock sun, also known as a parhelion (plural parhelia) in meteorology, is a natural optical phenomenon that appears on either side of the Sun and consists of one or two colorful light spots. Within a 22° halo, two sun dogs frequently flank the Sun. The margins that are closest to the Sun are usually reddish. Other colors can be seen on occasion, although the outer portions of each spot are usually pale. The sun dog belongs to the family of halos formed by ice crystals in the atmosphere refracting sunlight.

When sunlight refracts through frozen clouds holding hexagonal plate crystals oriented with their big, flat faces parallel to the ground, sun dogs often form in pairs on either side of our afternoon star. It usually appears as a pair of luminous patches around 22 degrees to the left and right of the Sun, and at the same altitude above the horizon as the Sun. They are technically known as parhelia (a singular parhelion) and are typically white, but can also be highly colorful, like separated rainbow bits with red on the inside, facing the Sun, and blue on the outside.

Sun dogs can be found anywhere in the world at any time of year, although they aren’t always visible or dazzling. Sun dogs are most visible and noticeable when the Sun is close to the horizon. Sundogs are created by ice crystals, whereas rainbows are created by raindrops. A rainbow is created by the refraction, reflection, and dispersion of light in raindrops. When light waves collide with a surface or another boundary that does not absorb the energy of the radiation, the waves bounce away from the surface. Because the light is not “bent” (or refracted), it is not divided into its component colors, and all wavelengths are reflected at equal angles.

A Sun halo, which is a circle of light that forms a 22-degree ring around the Sun, is a similar phenomena. The origin of the phrase “sun dog” is unknown to scientists. Historians have discovered that the term has been used in art and literature for more than a century. Some analysts believe the phrase came about as a result of comparing parhelia’s devotion to the Sun to a dog’s devotion to its master. A sun dog’s colors are reddish on the interior, where it is closest to the Sun and blueish on the exterior.

The refraction of sunlight through ice crystals can result in a variety of optical effects, including the transformation of white cirriform clouds into a rainbow of colors. The halo, also known as an ice bow, nimbus, or gloriole, is created by hexagonal ice crystals floating in cirrostratus clouds refracting sunlight in the same way that sundogs do. The crystals serve as prisms, deflecting light rays traveling through them by at least 22 degrees. Sunlight is refracted horizontally as the crystals slowly drift downhill with their enormous hexagonal faces practically horizontal, resulting in sun dogs to the left and right of the Sun. Sundogs with larger plates wobble more, resulting in taller sundogs.

A halo is a ring of light that forms around the sun or moon when light from the sun or moon refracts off ice crystals in cirrus clouds. The halo is commonly viewed as a dazzling white ring, although it can also be colored. Sun dogs are red on the side closest to the Sun, then the hues fade to oranges and blue as they go further away. The colors are subdued and overlapping, never pure or vivid. The sun dog’s colors gradually blend into the parhelic circle’s white (if the latter is visible).

When ice crystals are perfectly aligned at 22 degrees from the Sun, the visual effect becomes even more striking, resulting in more horizontal refraction or bending of light. These solar optics events can occur at any time of year, everywhere on the planet, even if they are not always visible, perfect, or bright. They are, nevertheless, more common during the colder months, when storms produce high, thin cirrus cloud decks and the Sun is close to the horizon. The same plate-shaped ice crystals that generate sun dogs also cause the colorful circumzenithal arc, therefore these two types of the halo are frequently seen together. Because it is almost directly overhead, the latter is frequently overlooked by spectators.

When the Moon is nearly full and exceptionally brilliant, the sun dog phenomena can also occur at night. Because the conditions required for their development are rare, these moon dogs, or paraselenae, aren’t observed nearly as frequently as sun dogs. As the sun rises higher in the sky, the rays traveling through the plate crystals become increasingly skewed from the horizontal plane, increasing their angle of deviation and moving the sun dogs farther from the 22° halo while remaining at the same elevation. The halo is visible even when the Sun is high, unlike sundogs, which are only visible when the Sun is near the horizon. As the Sun rises, Sundogs appear along with the 22° halo and then vanish.

The Greeks, according to historians, were the first to recognize sun dogs. Two mock suns rise with the Sun, most typically at sunrise or sunset, according to Aristotle (382-322 BC). The 2nd-century Roman writer and philosopher Apuleius in his Apologia XV says “What is the cause of the prismatic colors of the rainbow, or of the appearance in heaven of two rival images of the sun, with sundry other phenomena treated in a monumental volume by Archimedes of Syracuse.” The word “sun dog” has been linked to Norse mythology, Ancient Greece, and the Cornish dialect, according to etymologists.