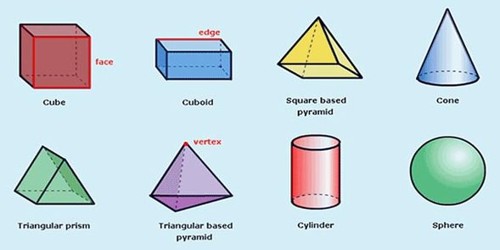 In mathematics, solid geometry is the traditional name for the geometry of three-dimensional Euclidean space. Examples like cones, cylinders, prisms, pyramids, polyhedra, and spheres. Solid geometry also includes the study of points, lines, shapes, and regions in relation to solids and surfaces.

Solids have properties (special things about them), such as:

(i) Dimension: Each of length, breadth, and thickness of anybody is called a dimension of the body.

(ii) Point: A point has no dimension, that is, it has neither length nor breadth nor thickness; it has position only. (vi) Solid Geometry: The branch of geometry which deals with the properties of points, lines, surfaces and solids in three-dimensional space is called solid geometry.

(vii) Plane or Plane Surface: If the straight line joining two points on a surface lies wholly on the surface then the surface is called a plane surface or a plane.