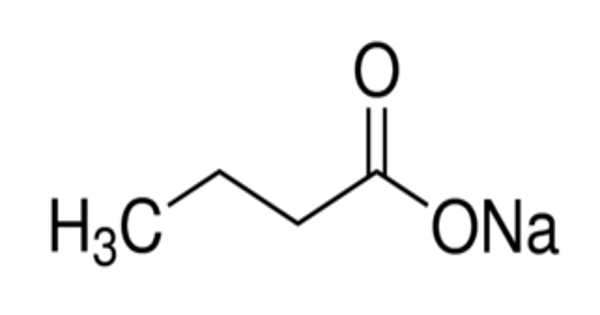 Sodium butyrate is a chemical compound with the formula Na (C3H7COO). Butyric acid is the sodium salt of butyric acid. It is the sodium salt of butyric acid, a short-chain fatty acid that inhibits histone deacetylases (HDACs), resulting in histone hyperacetylation. It inhibits proliferation, induces differentiation, and induces or suppresses gene expression in cultured mammalian cells. This results in changes in chromatin structure and gene expression, which have a wide range of biological consequences. As a result, it can be used in the lab to produce any of these effects.

Butyrate is a short-chain fatty acid produced in the colon by microbial fermentation of dietary fibers. Butyrate has been shown to have numerous beneficial effects at the intestinal and extraintestinal levels over the last decade. Butyrate has a variety of mechanisms of action, many of which involve epigenetic regulation of gene expression via inhibition of histone deacetylase.

Butyrate treatment causes histone hyperacetylation, and butyrate inhibits class I histone deacetylase (HDAC) activity, specifically HDAC1, HDAC2, and HDAC3, and butyrate can be used to determine histone diacetylene in chromatin structure and function. It is estimated that inhibiting HDAC activity affects the expression of only 2% of mammalian genes.

Sodium Butyrate is a sodium salt of butyrate that may have antineoplastic properties. Butyrate, a short-chain fatty acid, binds to the zinc sites of class I and II histone deacetylases competitively (HDACs). This binding affects histone hyperacetylation, resulting in a modified DNA conformation and, as a result, chromatin uncoiling or relaxing. Increased chromatin accessibility to transcription-regulatory complexes results in increased transcriptional activation of various epigenetically suppressed genes. Butyrate, an HDAC inhibitor, induces G1 or G2/M cell cycle arrest and increases the expression of other genes and proteins involved in cellular differentiation and apoptotic signaling.

Sodium butyrate is typically found in the laboratory as a white, water-soluble, crystalline solid. The chemical is notable for its lingering, very strong, unpleasant odor. Gloves, eye protection, and respiratory masks are recommended when working with sodium butyrate.

The compound is found in the human diet, most notably in Parmesan cheese and butter, where it is produced in large amounts from dietary fiber in the gut. Nonetheless, the most common source of sodium butyrate in the gut is legume consumption, which, along with fiber, has been linked to delayed aging and increased healthspan.

Sodium butyrate is an organic sodium salt formed by replacing the proton in the carboxy group of butyric acid with a sodium ion. It acts as an inhibitor of EC 3.5.1.98 (histone deacetylase). It has butyrate in it.